Renowned attorney and DNA expert Barry Scheck, co-founder of the Innocence Project, will be the next guest of the University Lectures series on Tuesday, Nov. 11, in Hendricks Chapel. 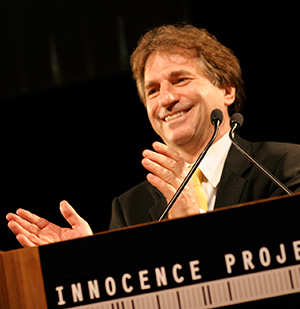 Scheck’s lecture, “The Innocence Project: DNA and the Wrongly Convicted,” will begin at 7:30 p.m. and is free and open to the public. American Sign Language (ASL) and Communication Access Real-Time (CART) will be available during the lecture. Reduced-rate parking will be available in Irving Garage.

Scheck is known for years of landmark litigation that set the standard for using DNA evidence in courts throughout the country. He has spearheaded a nationwide movement to re-examine the fairness and efficacy of our criminal justice system. Started in 1992, the Innocence Project is a national litigation and public policy organization dedicated to reforming the criminal justice system to prevent injustice. Scheck and the organization have used DNA evidence to exonerate almost 300 wrongfully imprisoned people, many of whom were on death row or had been incarcerated for decades.

In “Actual Innocence: Five Days to Execution and Other Dispatches from the Wrongly Convicted,” Scheck exposed the mishandled evidence and coercive interrogations that plague the legal process. Publisher’s Weekly called the book “an alarming wake-up call.” In October 2010, Scheck and the Innocence Project were featured in the 2010 film “Conviction.”

A DNA expert with the O.J. Simpson defense team, Scheck has represented notable clients, including Hedda Nussbaum, Louise Woodward and Abner Louima. A commissioner for the New York State Forensic Science Review Board and professor at the Cardozo School of Law at Yeshiva University, Scheck is considered to be on the of 100 most influential lawyers in America.