A contemporary play about the complicated last days of Félix Lope de Vega y Carpio, the foremost Spanish playwright of the 1600s, is coming to Syracuse University. 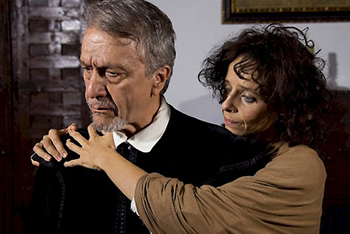 The Spanish theater company Fundación Siglo de Oro will present “Entre Marta y Lope” (“Between Marta and Lope”) on Tuesday, Nov. 11, at 8 p.m. in Grant Auditorium. The performance, which is free and open to the public, is in Spanish with English surtitles. There will be a brief reception before the performance for Syracuse faculty and local high school Spanish teachers.

For more information, call the Department of Languages, Literatures, and Linguistics (LLL) in the College of Arts and Sciences at 315-443-2175.

“’Entre Marta y Lope’ is designed to introduce audiences to a key figure in Spanish Golden Age literature,” says organizer Alejandro García-Reidy, assistant professor of Spanish in LLL. “The work centers on the relationship between Lope, a worn playwright and incorrigible womanizer, and Marta de Nevares, a married woman with whom he had an affair, after entering the priesthood. ‘Entre Marta y Lope’ is pure theater—a celebration of a man to whom the world was one big stage.”

García-Reidy says that, despite the length and intensity of the relationship, it was anything but smooth. Records indicate that Marta eventually went blind and became mentally ill, but Lope insisted on taking care of her until her death in 1632. He died three years later.

“Although Lope had seen it all, Marta sparked something in him that was different,” says García-Reidy, who recently made headlines with the discovery of the manuscript to Lope’s play “Mujeres y criados” (“Women and Servants”). “Marta was a strong and cultured woman—perhaps more of Lope’s equal than a romantic dalliance. She’s been described as ‘his sin, his passion, his reward, and his punishment.’” 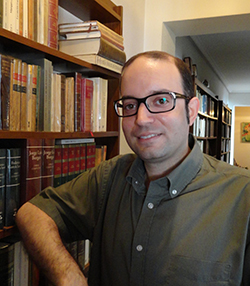 The play, which premiered last year in Madrid, is touring the United States through the auspices of the Golden Age University Theatre Network, a collaboration between Fundación Siglo de Oro and several American universities and educational institutions.

Gail Bulman, associate professor of Spanish and chair of LLL, considers the performance a unique opportunity for students and faculty. “’Entre Marta y Lope’ is a heartfelt look at an important but troubled man, performed by one of today’s leading Spanish theater companies,” she says.