The sonic and cinematic strategies of hip-hop producer and rapper T-Pain are the subject of a forthcoming scholarly article by James Gordon Williams, a new faculty member of the College of Arts and Sciences. 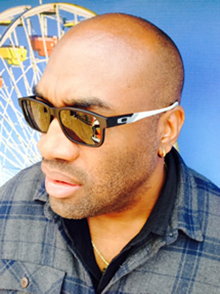 An assistant professor of African American studies (AAS), Williams is the author of “Crossing Cinematic and Sonic Bar Lines: T-Pain’s ‘Can’t Believe It,'” which will be published in Volume 19 of the University of California, Los Angeles’ Ethnomusicology Review on Wednesday, Nov. 12.

Williams’ research and creative practice focuses on “crossing bar lines,” a phrase he coined that defines the study of musical resistance in various genres of black cultural production.

“My article examines how T-Pain’s earlier radical improvisational work with Auto-Tune and his subsequent cinematic strategies in his widely popular video represent radical black imagination,” says Williams, who also is a pianist and composer. “T-Pain’s ‘Can’t Believe It’ video resonates with historical practices of how black bodies are represented in visual media.”

Williams, who earned a Ph.D. in integrative studies at the University of California, San Diego, says T-Pain has transformed Auto-Tune into a subversive technology that represents black subjectivity instead of its traditional use as pitch correction software.

“I connect sonic analysis to signifiers in the video, which are representations that deploy constructions of race, class, gender and sexuality, as they relate to notions of blackness,” he adds.

Born and raised in Los Angeles, Williams has lived, studied and performed in various cities, including Boston, New York and most recently, San Diego. An accomplished musician and critical musicologist, he is interested in how music composition and improvisation reflect notions of African diasporic racial identity.

“James has a wealth of unique experience, both scholarly and practical, and we are thrilled he is sharing this knowledge with the Syracuse University community,” says Kishi Animashaun Ducre, associate professor and chair of AAS. “His new article is not only timely and relevant, but also speaks to the importance of fostering the educational potential of African American, urban and youth cultures.”