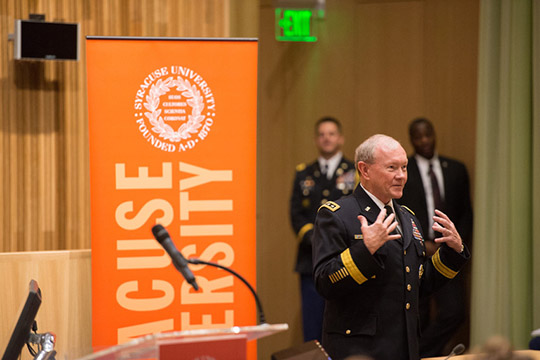 Gen. Martin E. Dempsey, the 18th chairman of the U.S. Joint Chiefs of Staff, spoke on global security challenges, leadership and a life in public service Friday in the Melanie Gray Ceremonial Courtroom in Dineen Hall.

Gen. Martin E. Dempsey, the 18th chairman of the U.S. Joint Chiefs of Staff, who addresses global threats as the principal military advisor to President Barack Obama, spoke to the importance of a life in public service as part of a lecture Friday in the Melanie Gray Ceremonial Courtroom in Dineen Hall.

Dempsey also shared his concerns on global security and his thoughts on leadership, engaging the audience of about 300 with both serious issues and moments of levity.

The theme of the day’s event, “Public Service in an Age of Complex Global Security Challenges,” resonated with Dempsey.

Dempsey’s lecture was hosted by Syracuse University’s Institute for National Security and Counterterrorism (INSCT) and the Institute for Veterans and Military Families (IVMF), represented by INSCT Director William C. Banks and Vice Chancellor for Veterans and Military Affairs J. Michael Haynie who both spoke at the event. His visit was one of many events celebrating the 90th anniversary of the Maxwell School of Citizenship and Public Affairs.

Maxwell School Dean James B. Steinberg, who introduced Dempsey, said it is a proud time for the Maxwell School and its history of public service and engagement.

At the heart of its role as a school of citizenship, Steinberg said, is “the conviction that our greatest responsibility is to help the next generation think how they can make the world of tomorrow better than the world of today.”

During his more than 40 years of service, Dempsey, who graduated from West Point, has served various levels of the U.S. Army, from platoon to combatant command. Dempsey recognized several dozen audience members who are currently serving or are military veterans and acknowledged the work of Syracuse in helping further develop leaders.

For those seeking a role in public service, Dempsey noted that many policy and strategy decisions are made in public. “You will probably find increasingly you are constantly under scrutiny for the decisions you make,” Dempsey said.

Dempsey talked about global security concerns in terms of a mnemonic device he uses: “2, 2, 2 and 1.” Those are designated by two heavyweights (Russia and China), two middleweights (Iran and North Korea), two networks (al Qaeda and affiliated terror groups and transnational organized crime) and a domain (cyber).

The difficulties on the Korean peninsula emanate from North Korea’s young, inexperienced and xenophobic leader, all of which keep him isolated and dangerous, Dempsey said.

With Iran, there is a path to resolve nuclear issues, but there are other issues with Iran—as a global sponsor of terrorism, an active threat in cyber security and a destabilizing force in the Middle East.

The networks are much more than just al Qaeda, Dempsey said. “It’s a network of radical religious terrorism that runs from Pakistan across the region and all the way into Nigeria.” The various groups have a common ideology, with some, such as ISIS, taking it to another more dangerous level.

Dempsey also pointed to cyber security as a dangerous problem. “If we do face a crisis in the immediate future, it’s likely to be in cyber,” Dempsey said. “We’re not dealing with cyber effectively, in the opinion of the 18th chairman of the Joint Chiefs of Staff.”

Dempsey offered some advice to future leaders, noting that they need to be agile, be able to take risks and allow subordinates to take risks, have candor and have both competence and candor. “Competence will get you to the table but character will keep you there,” he said. 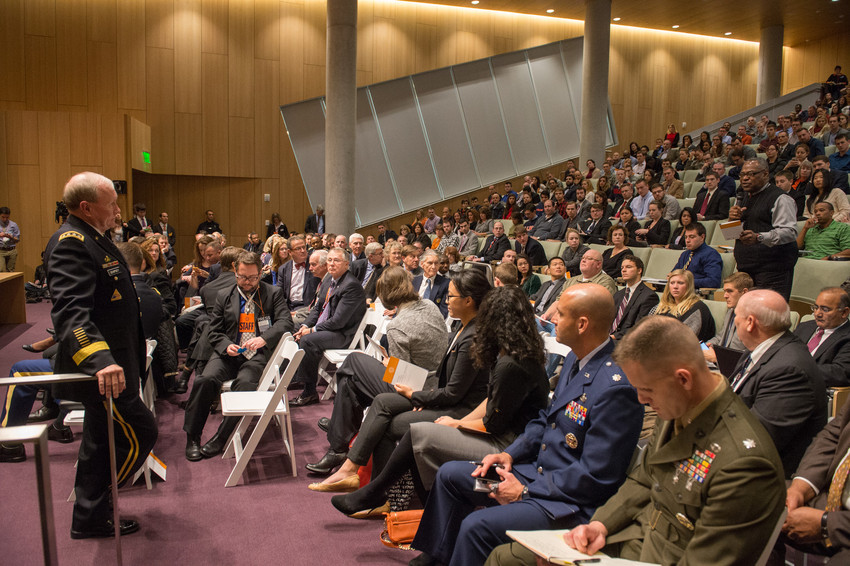 Gen. Martin Dempsey listens to a question from an audience member during his presentation Friday at Dineen Hall.

Differences are easy to spot, but genius is what allows people to come together—something this country has been good at. “You need to see genius, which is to say you need to find unity, and if you do that the country will be fine,” he said.

Dempsey took several questions from audience members, including one from a student who questioned the draw down of the military with effectively dealing with terrorist threats.

“The size of the military in response to terrorist threat is less of a factor than if we had a conventional conflict with Russia or some conflict with China or conflict on the Korean peninsula,” Dempsey said.

Dempsey recommended two books to further understand the shifting power dynamics and the immediacy of now in developing strategies—“Present Shock: When Everything Happens Now” (by Douglas Rushkoff) and “The End of Power: From Boardrooms to Battlefields and Churches to States, Why Being In Charge Isn’t What It Used to Be” (by Moises Naim).

“One of the things I tell people is I have no authority as chairman,” Dempsey said. “But I have enormous influence.” He also has convening authority and called Naim to talk to the Joint Chiefs of Staff on his thesis on how the challenge is to use not military strength on strength, but how to see military strength in dealing with inherent weakness.

“The Middle East is inherently fragile and intensely weak,” Dempsey said, so it’s difficult to apply military power in seeking solutions in such an area of inherent weakness.

Dempsey was also questioned about whether there was enough being done to promote military careers.

Dempsey pointed to the military’s recent “Commitment to Service” initiative in which U.S. service members and athletes serve side by side to address shared challenges and commit to public service. Along with a group from USA Basketball and college basketball coaches, men’s basketball coach Jim Boeheim participated in a strategy seminar with Dempsey and military officials in May at the Pentagon as part of the initiative.

Haynie noted the importance of Dempsey’s lecture at the University, which he said “will add yet another chapter to the long narrative that is the Syracuse University story of engaging and being a partner to the nation’s military, our veterans and their families.”