The National Endowment for the Humanities and the Community Folk Art Center will sponsor a screening of director Stanley Nelson’s documentary “Freedom Summer” Monday, Nov. 3, at 6:30 p.m. in 220 Eggers Hall.  The screening is part of the series titled “Created Equal: America’s Civil Rights Struggle.” 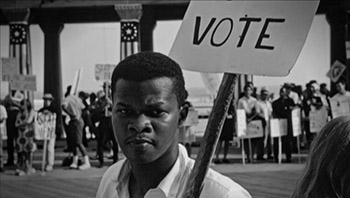 A young man works to register voters during Freedom Summer, 1964.

This year marks the 50th anniversary of the Freedom Summer campaign. For 10 weeks in the summer of 1964, a dedicated cadre of Mississippi activists partnered with northern college students for a massive campaign to register black voters and draw national attention to the violence and injustice that defined the daily lives of black Mississippians. This project inspired a wave of protest that shook the foundations of segregation and brought Mississippi’s civil rights battle to a boiling point. Events culminated in August with the discovery of the bodies of three murdered civil rights workers and an organized effort to unseat Mississippi’s all-white delegation to the Democratic National Convention in Atlantic City.

The film will be followed by a panel discussion.