Medicolegal death investigation (MDI) is the focus of a new graduate program in the Forensic and National Security Sciences Institute (FNSSI), administered by the College of Arts and Sciences. 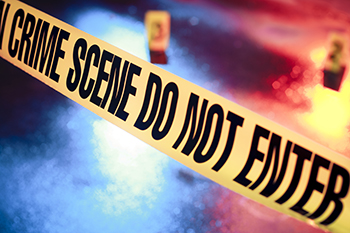 The master’s degree in medicolegal death investigation is the first in the nation.

The first of its kind in the nation, the master’s degree in MDI is a 36-credit-hour program for entry-level and mid-career professionals engaged in death investigations. The M.S. program, in conjunction with the Advanced Certificate in MDI, provides critical training for medical and legal professionals, first responders, coroners and forensic scientists.

“This nationally unique program trains students to apply scientific techniques to medicolegal forensic investigations—a fundamental process of our criminal justice system,” says James T. Spencer, executive director of FNSSI and a Meredith Professor of Chemistry. “The M.S. program is part of a larger effort at FNSSI to better train MDI personnel at multiple levels, thus raising the standard by which death investigations are handled in New York State and around the country.”

The M.S. program was created in response to a congressionally mandated report from the National Research Council. The report found that medicolegal investigations lacked, among other things, suitable training standards, adequate oversight and continuing education opportunities.

As a result, FNSSI chose to develop its curricula in strict accordance with the New York State Division of Homeland Security and Emergency Services, the National Association of Medical Examiners and the Scientific Working Group in Medicolegal Death Investigation. Syracuse students will be trained to preserve evidence, provide suitable documentation and interact appropriately with other death investigators and relatives of the deceased.

“Our program fills an unmet need at the state and national level by providing training opportunities for professionals involved with death investigation,” Spencer says. “Among the greatest beneficiaries will be legal and medical professionals who deal with medical examiner reports and criminal cases.” 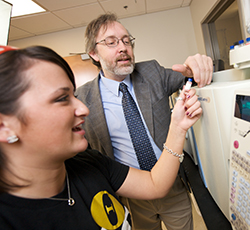 James Spencer works with a student.

Michael Sponsler is the FNSSI director of curricular programs and a chemistry professor. He says that recent advances in basic scientific research have greatly changed the way forensics are taught.

“When people understand the science behind forensics, they’re more adept at criminal investigations and judicial proceedings,” he says. “Basic research touches on almost every discipline and is the foundation on which FNSSI resides.”

MDI students benefit from professional development workshops and conferences; access to world-class facilities; direct interaction with practitioners in the field; and experiential training opportunities at organizations such as the FBI Laboratory, the National Institute of Justice and New York’s State Police Crime Laboratory System.