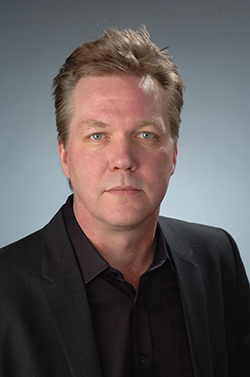 The awards will be used to support the Humanities Corridor in perpetuity, while creating endowments at its founding institutions: $2 million for Syracuse, $750,000 for Cornell and $500,000 for Rochester. Each institution will match its respective amount.

“We are extremely grateful to the Mellon Foundation for helping us in our effort to establish a sustainable model for scholarly excellence in the humanities,” says Syracuse Chancellor and President Kent Syverud. “The Mellon Foundation’s support of the Humanities Corridor will forge a lasting presence in the region that is far greater than the sum of its parts.”

According to Humanities Corridor Director Gregg Lambert, Syracuse, Cornell and Rochester are required to match the fund over a 39-month period, bringing the total endowment to $6.5 million. He says the grant also comes with a $300,000 expendable gift to Syracuse.

“The $300,000 will enable us to create a pre-endowment fund,” says Lambert, who also serves as Dean’s Professor of the Humanities in Syracuse’s College of Arts and Sciences. “This amount, combined with funds remaining from a Phase II grant awarded in 2011, will underwrite project activities through 2017.”

The result is Syracuse’s first-ever Mellon endowment—a testament, he adds, to the foundation’s commitment to the collaborative study of the humanities.

The Mellon Foundation has generously supported the Humanities Corridor since its founding in 2005. Cathryn R. Newton, dean emerita of the College of Arts and Sciences and professor of interdisciplinary sciences at Syracuse, oversaw the project’s first phase in 2005-08. Since then, Lambert has served as its director and principal investigator.

To date, the Humanities Corridor has administered seven thematic research clusters and more than 60 faculty working groups, involving hundreds of established scholars, junior faculty members and graduate students. The project has spawned a variety of inter-institutional agreements and cost-sharing mechanisms in areas as diverse as philosophy; linguistics; visual arts and culture; musicology and music history; the digital humanities; language, literature, and culture; and archives and media.

Lambert says his leadership team—which includes Peter Lennie, provost and professor of brain and cognitive sciences at Rochester; and Timothy Murray, director of the Society for the Humanities and professor of comparative literature and English at Cornell—is poised for the next level of success. 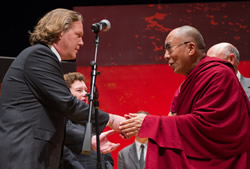 Gregg Lambert greets the Dalai Lama during the latter’s visit to the Syracuse University campus in the fall of 2012.

“Each founding institution brings a distinguished scholarly tradition to the collective work of the Humanities Corridor,” Lambert says. “Furthermore, emerging collaborations with the New York Six Liberal Arts Consortium have advanced the Corridor’s regional alliances. This grant award will foster the region’s humanities community, while enhancing the visibility of its scholarly disciplines and networks.”

At Syracuse, the Humanities Corridor is an all-University project, located in the historic Tolley Humanities Building. The building also houses the Syracuse University Humanities Center, which is administered by the College of Arts and Sciences.

Lambert is quick to acknowledge the support of his peers but reserves special praise for the vision of the Mellon Foundation in fostering new models of inter-university collaboration in the humanities.

“The Mellon Foundation has enabled us to create a model of collaboration and resource-sharing that is adaptable to other regions and university consortia,” says Lambert, citing a recent article in The Chronicle of Higher Education, in which the Humanities Corridor is reported to have inspired the Midwest’s new Mellon-funded Humanities without Walls consortium. “Embarking on a path to long-term sustainability, in close partnership with the Andrew W. Mellon Foundation, the Corridor will extend the impact of the humanities into the future.”

Research connections to the natural world are a key cornerstone of the BioInspired Institute. The work of BioInspired scientists, especially the work connected to animals, was featured in the Washington Post article “Animals inspire scientists to solve problems that humans…

To commemorate Veterans Day this year, LawnStarter ranked 2023’s Best Cities for Veterans, where they looked at cities with high populations of veterans and determined it by ease of navigation of resources, housing affordability, employment, educational opportunities, and other metrics….