The Department of Communication and Rhetorical Studies (CRS) in the College of Visual and Performing Arts has been selected to host the prestigious Biennial Public Address Conference (BPAC) in 2016. Founded in 1988, BPAC is a premier symposium featuring the field’s most influential scholars, established and emergent, at the moment. 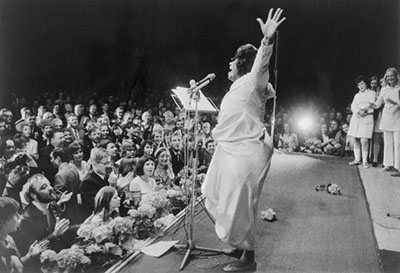 The purview of public address has expanded in recent years to include diverse modes of address. Here, an audience is spellbound by Mahalia Jackson’s performance during the Civil Rights era.

“The Biennial Public Address Conference is a jewel in the discipline, having been over its nearly 30 years a prestigious gathering of the field’s luminaries and emergent voices in the study of public discourse, its name a monument to a century’s tradition of erudition and eloquence,” says Charles E. Morris III, professor and chair of CRS. “Scholars in part measure their career success by whether they have been invited to present research at the Biennial Public Address Conference. Competition to host the conference has always been fierce. For Communication and Rhetorical Studies, the first and oldest communication curriculum on campus, to have won this bid in its initial effort says so much about the national reputation of this department and its stellar faculty.”

Public address is the subfield of rhetorical studies dedicated to the history and criticism of public discourse in the United States. It dates to the founding of the discipline a century ago. Originally focused on the history of oratory in American history, the purview of public address has expanded in recent decades to include diverse modes of address, from political speech and writing, to film and other performances of popular culture, to activist rhetorics and public art. Public address remains one of the most revered subfields within the National Communication Association.