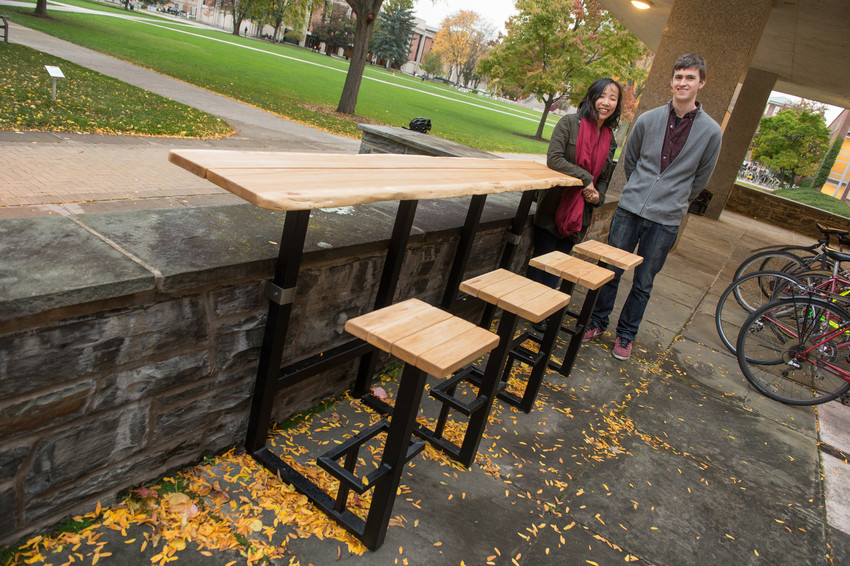 Sally Zheng ’16 and Ryan Pierson ’16 display their design of Park Bar, a modular seating system, on the patio of Hinds Hall.

It’s an ideal place to study with your team, take a lunch break or just relax.

Sally Zheng ’16 and Ryan Pierson ’16 have created some fresh, new seating on the Quad to accommodate a number of uses for students and the entire University community.

Park Bar is a modular design seating system, with a set of square wooden seats connected by a metal frame to a high wooden slab counter. The simple, sustainable design offers convenient seating and workspace on the patio of Hinds Hall, with two four-seat benches.

“Students go outside to the Quad and bring a blanket and their laptop, but it’s uncomfortable. And when the weather’s nice, you want to be outside,” Zheng says. The Park Bar offers a solution with seating and a desktop.

The benches were installed Oct. 17 and University community members celebrated the students’ work during an event at the site Thursday, Oct. 23.

“This has been a long time in the works,” Pierson says.

The two industrial and interaction design students (in the College of Visual and Performing Arts) came up with the idea for the International Design Competition held by Design Museum Boston. They were named finalists in 2013 and their design was part of a public exhibition. They had also temporarily installed Park Bar inside Café Kubal in Marshall Square Mall.

When the Fast Forward competition was announced as part of Chancellor Kent Syverud’s inauguration last spring, they saw a way to bring it to campus.

“We saw there was a problem we could solve with Park Bar and make it a reality with Fast Forward,” Zheng says.

The Fast Forward competition encouraged students to come up with ideas for projects to show how students can have a positive impact on the world. Funding was offered to 13 finalists, who presented their ideas to the Chancellor on Inauguration Day in April. 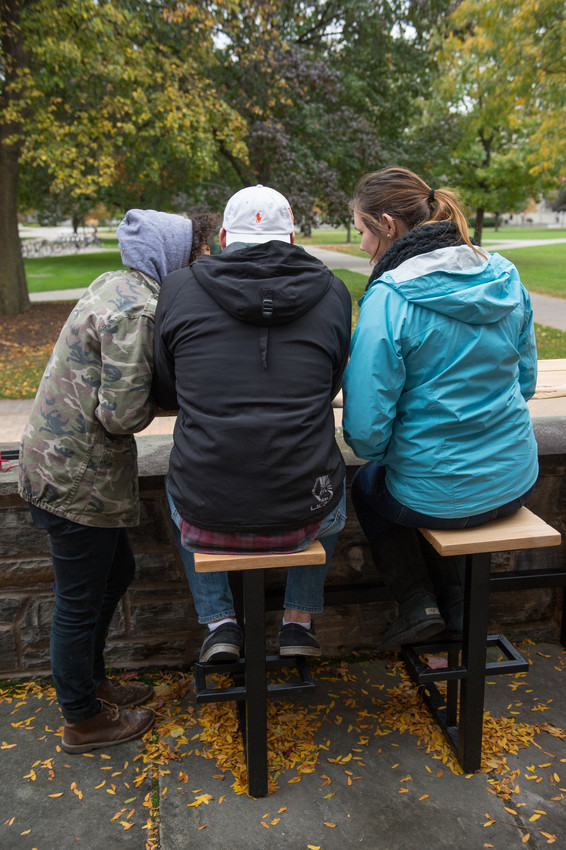 Students check out the new Park Bar benches on the patio of Hinds Hall.

Zheng and Pierson made the wooden seats and top using hickory milled by Zeke Leonard, assistant professor of environmental and interior design. The wood was from a tree cut down by Don Carr, professor of industrial and interaction design, on his property.

The students did all the woodworking for the pieces, spending hours in a basement space at the Nancy Cantor Warehouse sanding and finishing the wood with Australian timber oil to protect it from the elements, while giving it a natural look.

“What we love about the design is you can extend it to any number of seats, depending on the client,” Zheng says. “We felt the four seats for the Quad Park Bar made it an even number for group projects.”

An important component of Park Bar is its sustainable use of materials. A prior version of Park Bar was created using materials from a demolished building in Syracuse. When reclaimed wood is not available, Zheng and Pierson use wood that has been sustainably harvested and locally milled.

Sculpture student Noah Hausknecht ’14 did the welding using metal purchased from Klein Steel in Syracuse. Those were other important facets to the project, the assistance of campus members and sourcing all local materials.

“It tells the story of Syracuse, with all of its different parts,” Pierson says.

The process also allowed them to see how the process would work in the real world, by working with various vendors to get a project done, Zheng says.

The class helps students get feedback on their ideas, including peer feedback, which is especially useful, Sonneborn says. Students also learn about marketing and talking to their customers about how they are using the product.

Zheng and Pierson were dedicated to their vision and had gotten a lot of feedback from their Café Kubal location.

“They were passionate about this idea,” Sonneborn says.

Bench with a view

In the final stages of the process, Zheng and Pierson worked with University officials to determine the best spot for the Park Bars on campus. Once the benches were completed, members of the University’s Physical Plant picked up the units and secured them at the Hinds Hall location using a bracket system.

“We were just happy with all the hard work. It was a goal we had and it was a good feeling to have accomplished it,” Zheng says.

At Thursday’s event, many students came out to try out the new benches.

Bryan Dosono, a Ph.D. student at the iSchool, says the benches will be a great draw to get outside for lunch, especially during the warmer months. “It’s an interesting aesthetic,” he says. “It really adds unique value to the outside environment and Hinds Hall.”