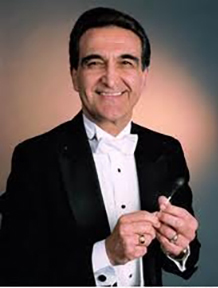 The Wind Ensemble is the University’s premiere concert band and is primarily made up of musicians from within the Rose, Jules R. and Stanford S. Setnor School of Music in the College of Visual and Performing Arts.

Maiello is associate director for development, professor of music and University Professor at GMU. He conducts the GMU Repertory Orchestra and teaches graduate and undergraduate conducting, jazz theory and arranging and advanced sight-singing. From 1996-2009, he conducted the GMU Symphony Orchestra and Chamber Orchestra. Under his direction, the ensembles at both Crane and GMU commissioned new works, made numerous recordings and appeared at national and international conferences.

Maiello also makes professional appearances both nationally and abroad, conducting music festivals, adjudicating ensembles and presenting clinics, lectures and workshops throughout the United States, Canada, Mexico, the Bahamas and Europe. He conducted musical activities for the gold medal ceremonies at the 1980 Winter Olympics in Lake Placid, N.Y.; served as musical director for Music Festivals International; was selected as president of International Association of Jazz Educators-New York State Chapter; and is a guest clinician for Yamaha Corp. and Warner Bros. Publications. In 2010, he was inducted into the Bands of America Hall of Fame at Music for All’s Indianapolis headquarters.

For more information about the concert, contact the University Band Office at 315-443-2194.