Award-winning poet Daisy Fried will participate in the Fall 2014 Raymond Carver Reading Series with a reading Wednesday, Nov. 5, in Gifford Auditorium. A question-and-answer session is from 3:45- 4:30 p.m., followed by the reading, which begins at 5:30 p.m. 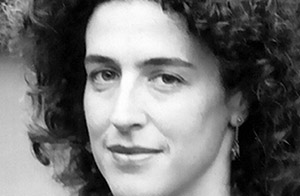 The New York Times praised Fried’s third and most recent poetry collection, “Women’s Poetry: Poems and Advice” (University of Pittsburgh, 2013), calling it “a commanding book.”  Fried will “tense up” when she hears “an affirming poem,” the Times wrote. Rather, she says of her work, finding “Sourness (is) a kind of joy I try for intricately.”

Her poems focus on iconic images of the day, including road rage, smartphones and Facebook. One poem, “Kissinger at the Louvre (Three Drafts),” slyly critiques today’s self-centered attitude. A tourist notes “a dark figure” who “looks familiar,” in the background of a selfie she took in the museum. “I look fat in it,” the tourist says, “And deletes.”

“Fried’s poem suggests ignorance shapes our record of history as much as or more than anything else,” Poetry Magazine wrote of “Kissinger at the Louvre.” “It’s a funny, bleak move, in which obliviousness has the last say.”

The Times also highlights the collection’s first and last poems. The reviewer calls “Torment,” a “biting narrative about narcissistic students” and “Ask the Poetess” a “hilarious parody of advice columns and the poetry business.”

The collection and its poem of the same name create a “complex picture of the relationships between gender, work, family and power,” Poetry Magazine notes. It “contrasts the realities of contemporary experience for a professional female poet with the hopes and aspirations of second-wave feminism.”

Library Journal named “Women’s Poetry” one of the five best poetry books of 2013.

Her poetry has appeared in outlets including the London Review of Books, The Nation, The New Republic, Poetry, The Threepenny Review and the anthology “Best American Poetry 2013.” She reviews books of poetry for the New York Times, Poetry and the Threepenny Review. She won the Editors Award from Poetry for “Sing, God-Awful Muse,” her 2009 essay about reading “Paradise Lost” and breastfeeding.

Fall 2014 Series Schedule
This semester’s series will conclude with the following author. Further information is available by calling 315-443-2174

Wednesday, Dec. 3: The novelist Ruth Ozeki, whose most recent work, “A Tale for the Time Being” (Viking/Canongate, 2013), was shortlisted for the Man Booker Prize.