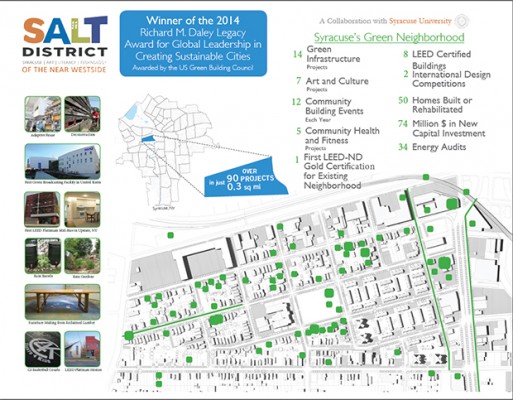 The Near Westside Initiative, a not-for-profit organization housed in Syracuse University’s Office of Community Engagement and Economic Development, has been named the 2014 recipient of the Mayor Richard M. Daley Legacy Award for Global Leadership in Creating Sustainable Cities from the U.S Green Building Council (USGBC). The award was presented during the USGBC’s annual Greenbuild conference in New Orleans on Thursday, Oct. 23.

The bi-annual award celebrates the NWSI’s position at the forefront of sustainability in the built environment, and is named for former Chicago Mayor Richard M. Daley, who during his tenure made Chicago one of the most environmentally friendly cities in the nation. Daley was the first recipient of the award in 2010.

“The stunning work that has been done by the NWSI board and leadership, community partners, Syracuse University, business community members and funders is an excellent representation of the leadership Mayor Daley inspired in Chicago and in communities around the world,” says Richard Fedrizzi, CEO and founding chair of the USGBC. “The NWSI’s commitment to community engagement, creative placemaking and green property and infrastructure development—including numerous LEED buildings that are part of the district—is exactly the kind of approach we want to celebrate and replicate in communities around the world.”

“It is gratifying and humbling to have a small neighborhood in Syracuse, New York, win this award for global leadership in sustainability from the U.S. Green Building Council,” says Marilyn Higgins, Syracuse University vice president for community engagement and economic development. “Neighborhood residents welcomed Syracuse University faculty and students, who, along with designers and researchers from the Syracuse Center of Excellence, made green innovation a driving force in the revitalization of the Near West Side.”

Established by Syracuse University and the Gifford Foundation in 2006, the NSWI combines art, technology and innovation with neighborhood values and culture as a pathway to the revitalization of Syracuse’s historic Near West Side neighborhood. “When I first heard about the NWSI, I was super excited,” says Carole Horan, vice chair of the NWSI board of directors and a neighborhood resident. “I could see that there would be some positive changes happening. I thought, ‘I am living in the right place at the right time.’”

“The NWSI was formed to holistically revitalize the Near West Side of Syracuse, to create a more vibrant and sustainable community for the folks who have lived here for generations, as well as families looking to relocate to Syracuse,” says NWSI Director Maarten Jacobs.

The NWSI leverages the resources of Syracuse University, New York State, the City of Syracuse, Onondaga County, private foundations, businesses, not-for-profit corporations and neighborhood residents to achieve its goals. Since 2006, $74 million in new capital investment has been made in the neighborhood, with 90 projects comprising green buildings and infrastructure, arts and culture, community-building events and community health and fitness completed or underway in a 0.3 square-mile area. Three hundred and eight new jobs have been created in the neighborhood over the past eight years.

The NWSI created the Syracuse Art, Literacy, Technology (SALT) District of the Near Westside as a creative community to foster economic development, jobs and stability for the neighborhood and rich academic experiences for Syracuse University students. This initiative brings together faculty and students with community activists and neighborhood residents on creative projects.

New York State’s Center of Excellence at Syracuse University (SyracuseCoE) has played a pivotal role on the Near West Side. “Near Westside residents have helped our partners learn invaluable lessons about bringing innovations from the lab to real projects,” says Edward Bogucz, SyracuseCoE executive director. “Revitalization of buildings and infrastructure in distressed neighborhoods is a critical challenge for cities across the country and around the world. Accomplishments in the Near West Side are sure to help inform similar efforts in many other communities.”

The SALT District was the first existing neighborhood in the country to earn certification under the LEED® for Neighborhood Development rating system. To date, green accomplishments in the neighborhood include: eight new or renovated buildings that have earned LEED® ratings; 14 installations of green infrastructure for stormwater management; more than 50 homes either built or rehabilitated; and more than 30 other homes that received investments to improve energy efficiency. Projects including the From the Ground Up competition—which constructed three innovative green homes in partnership with the SyracuseCoE and Home HeadQuarters (HHQ)—have earned international recognition.

“Green homes, rain gardens and permaculture are now synonymous with the SALT District’s brand as a place where art and green technology unite with neighborhood values and culture,” says Higgins. “Sustainability is built into the green basketball courts that were made possible by Onondaga County and the Jim and Juli Boeheim Foundation; St. Lucy’s community garden; and the solar panels that power WCNY.”

“The Near West Side Initiative is a great example of how the public and private sectors can team up with residents to create an excellent project,” says Onondaga County Executive Joanie Mahoney. “The initiative lifts up one of our most deserving areas and applies sustainable solutions. We appreciate their commitment to our Save the Rain program and congratulate them on this prestigious honor.”

Among the vast and varied NWSI projects throughout the Near West Side:

• The Lincoln Supply Building, an abandoned commercial warehouse, was rehabilitated and is the first mid-rise multifamily building in the Upstate New York to earn a LEED® Platinum certification. The building now houses La Casita Cultural Center, a project of Syracuse University’s College of Arts and Sciences, and residential space.

• WCNY, Central New York’s public broadcasting station, relocated from the Syracuse suburbs into a state-of-the-art broadcast and education center in a rehabilitated warehouse in the Near West Side neighborhood. It is the first green public broadcasting facility in the country.

• Salt Works (http://www.saltworkssyracuse.com), is a social enterprise based on the Near West Side that uses reclaimed timbers from a rehabilitated warehouse to make furniture and put people to work. GreenTrain, a program to give local residents skills in green contracting, has also been held in the neighborhood. Fifty-seven residents have been trained and 87 percent have been placed in full-time jobs.

• The neighborhood has served as a test bed for Onondaga County’s Save the Rain program.

• Projects such as 601 Tully, the SaltQuarters artist in residence program and a community garden have brought art and culture into the neighborhood and built community.