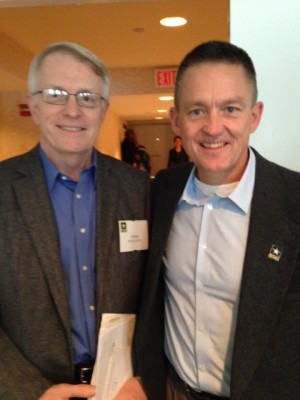 Dana Radcliffe, adjunct professor of public administration and international affairs in the Maxwell School and a senior lecturer of business ethics and management at Cornell University, recently led a seminar on “The Consequences of Power” as part of the U.S. Army’s Senior Leader Development Program in Washington, D.C. Most of the participants in the course were one- and two-star generals. Also participating in the session was the Army’s Vice Chief of Staff Dan Allyn, who, following Radcliffe’s presentation, spoke to the group on ethical challenges facing general officers and then chaired a panel discussion with four other generals and Radcliffe.

This was Radcliffe’s second time to conduct the course, which is a main component of the Army’s executive education program for senior officers. On both occasions, Radcliffe centered his talk on what he calls “The Spider-Man Principle”—the idea that “with power comes responsibility,” which he describes as the essence of morality. “As I emphasize in my classes, workshops and articles,” Radcliffe says, “any power—to influence or to affect the welfare of others—can be abused, which implies that power always carries responsibilities to those affected. What is often overlooked,” he added, “is that we all exercise power, every day in every interaction with others.

“Because a sense of duty is integral to their professional life, military leaders are well aware that their official power is constrained by institutional obligations,” Radcliffe says. “But I asked the participants to view power broadly, extending beyond formal authority to any ability any of us have to help or harm other people—in large and small ways—in all our roles and relationships.”

Much of the session was devoted to exploring the “temptations of power”—such as inflated self-worth, seduction by perks, and unwarranted secrecy—to which leaders in both the public and private sectors are increasingly vulnerable the more power they have. To ensure that they are able to recognize and resist such temptations, Radcliffe observes, leaders must actively foster and protect their integrity, thoughtfully balancing the demands of their positions, their personal values and the need for effective action.

This story was republished with permission from its author, Shannon Dortch, associate director of PR & Media at Johnson at Cornell University.