During an event at the Beacon Theatre in New York City, the Bandier Program Alumni Association announced its Allman/Lehman Endowed Scholarship . The scholarship is named after Gregg Allman of the Allman Brothers Band and Michael Lehman, the parent of a current Bandier Student and Allman’s manager. This contribution will be awarded annually to one student who demonstrates need. 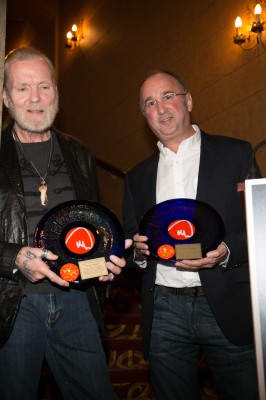 “When Michael told me about the Bandier Program for Music and the Entertainment Industries, I knew that it was something I wanted to stand behind and support,” says Gregg Allman, who has met with students from the program in previous years. “Starting the Allman Brothers in the 1970s, I have seen the industry turned inside out and recognize that it takes sharp skills to navigate the media landscape in this digital, streaming and downloadable age. This new business model makes a program like the one at Syracuse University more important than ever.”

The Bandier program, now in its seventh  year, was started with a generous gift from Sony/ATV chairman/CEO and SU alumnus Marty Bandier ’62 and has become a great success. Led by David Rezak, assistant professor of practice in the College of Visual and Performing Arts, the program has a 90 percent placement rate for the academic years 2011-13 and the class of 2014 is on track for the same placement rate. With that success as its backdrop, the Bandier program is aiming to prepare students of the future for the music business.

“We are always adjusting our curriculum to make sure our students are best prepared for the future,” says Rezak when discussing the ongoing digital disruptions happening in the industry. “Our students need to anticipate change. We can’t hope to tell them what will happen next, but we have to teach them to observe the earmarks of change.”

“My older daughter, Carly, graduated from Newhouse in 2012, but was very involved with the Bandier program, and my younger daughter, Lindsay, graduates from the Bandier program this spring, so I have had the chance to see, up close, just how rigorous and thorough it can be,” says attorney and artist manager Lehman. “Representing music artists, I know what it takes to not just survive but thrive in the business and the faculty in this program are at the top of their game. I want to support that.”

Rezak points out that this year also marks the tipping point for the Bandier program and its enthusiastic alumni. The program now has an equal amount of alumni as students, each numbering 100. To mark this occasion, Bandier alumni have created the Young Alumni Achievement Award and are presenting the first-ever accolade to Bandier program alumnus Drew Taggart ’12, one-half of the EDM sensation The Chainsmokers.

The duo scored an international hit when they released “#Selfie” which has been certified platinum by the RIAA for digital sales in excess of 1 million. “Drew has lived out the Bandier Program’s core values of innovation, excellence and humanity in his early career in order to achieve success as a multinational platinum recording artist,” says Andrew Beyda, president of the Bandier Alumni Association. “In his three years since graduating, he has exemplified the best hopes we have for Bandier students, and we are all very excited to follow his career and see what he’ll do next. As such, he was the natural choice to be the inaugural recipient of our Young Alumni Award.”

If Taggart’s success with The Chainsmokers demonstrates one thing the most, Rezak believes, it’s that the greatest opportunities in the industry will be entrepreneurial in nature. To that end, the Bandier program’s focus on entrepreneurship has been increased across all of its courses; semester programs in Los Angeles, New York City and Nashville have been added, and all students are now required to take a class on social media. This can only help to ensure the Bandier Program for Music and the Entertainment Industries remains a pre-eminent program of its kind.