Two Syracuse University professors have launched “Entrada Piano Technique,” an online resource for teachers and students of the piano. 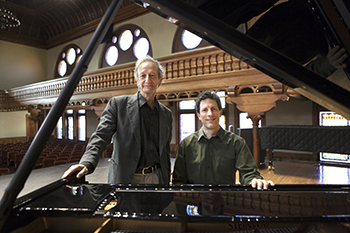 Richard Breyer, professor of television, radio and film in the Newhouse School, and Fred Karpoff, professor of music in the Rose, Jules R. and Stanford S. Setnor School of Music in the College of Visual and Performing Arts, created the program as an update to their “3-D Piano Technique,” which they launched in 2009.

“3-D Piano” includes more than four hours of video and an accompanying workbook that guides users through Karpoff’s three-dimensional approach. Hundreds of pianists and teachers around the world have used the series, and it has become a core component of piano pedagogy curricula in many American universities.

“In the five years since we launched 3-D Piano, video technology and the Internet have changed the way many of us do business,” says Breyer. “The DVD is no longer the way to deliver video, and online instruction is becoming a common feature of all forms of education.”

“Entrada Piano Technique” includes modules that average less than one minute. These short videos integrate sound, gesture and music, covering the “how” of piano playing, according to Karpoff. Teachers can integrate the modules into their lessons or assign modules to the students to integrate into their practice routines.

“Our vision is to provide modules that contain three-dimensional principles in a wide range of beginner through intermediate repertoire,” says Breyer. “And we plan to continually add to the Entrada library, responding to what Fred and Entrada subscribers discover in their studios, classrooms and concert halls.”