Theodros Belay ’16 and teams of students spread out across the South Side of Syracuse to encourage young people to think about the possibility of higher education. 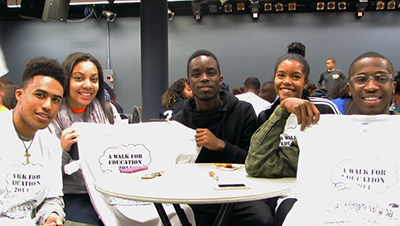 Students who participated in A Walk for Education reflect on the day’s events Sunday during a reception in the Underground in the Schine Student Center following the walk.

Their efforts as a part of A Walk for Education took a few hours on Sunday, Oct. 12, but Belay hopes their footsteps will reverberate for much longer.

“The next step is to await any contacts that may be received from the Syracuse community,” says Belay, president of the Syracuse University chapter of the National Society of Black Engineers (NSBE), which organized the event.

“An email address specifically for the walk was created so my board members can follow up and offer advice for residents looking to obtain more information on higher education,” he says. “This is just the beginning of providing a boost to the neighbors there.”

A Walk for Education, which is a grassroots program of the national NSBE, was organized for students to go door to door in underserved communities and hand out information on college, scholarships, preparation tools and the benefits of studying in the fields of science, technology, engineering and math.

Organizers hope the college students help spark an interest in the next generation of students in higher education, specifically those who might not see the possibility.

More than 200 students from dozens of student organizations, from Syracuse University and other colleges, including Rochester Institute of Technology, participated in the walk. Students then canvassed the area in teams to approach residents and young people with brochures, information and words of encouragement. 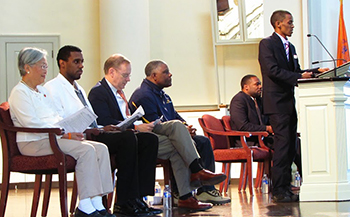 “The greatest pursuit of happiness of any individual I would say is when one learns to live a life not in service to you but to live a life in service to others,” Belay told participants during the kickoff event. “To be humble, to be selfless and to put the lives of others before ourselves, that I believe should be the goal as human beings.”

He also told students that their mission was to provide guidance and encouragement.

“We are trying to show that despite who you are or where you may come from, despite how far over the edge you think you may be, that there is a future of success and prosperity for you,” he said. “It is to show that it is never too late and that you too can be like us and obtain higher education.”

Belay appreciated that the Chancellor and community leaders were there to cheer on students.

“The two most inspiring moments of the event were, first, when I had the honor to interact with all these city officials and see them support this worthy cause—to know that our students are not alone in this mission to promote true change,” says Belay, a mechanical engineering student in the College of Engineering and Computer Science.

The second moment was when he was traveling the area and saw Syracuse students at almost every block of the South Side of Syracuse “attempting to bridge the gap for higher education,” Belay says.

“Our middle school and high school kids that NSBE tutors every week had also come out to support the movement. I never felt so proud,” he says.