For modern audiences, Shakespeare’s bloody tragedy “Macbeth” has nothing to do with song and dance. Yet, in Restoration England (1660–1714), Shakespeare was often revised to include these elements.

On Nov. 14-15, scholars, musicians, dancers and actors from the United States and Europe will gather for two days at the Folger Shakespeare Library in Washington, D.C., to analyze and perform Restoration Shakespeare. 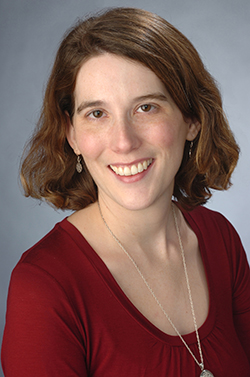 Amanda Eubanks Winkler, associate professor of music history and cultures in the College of Arts and Sciences, and a specialist in 17th-century English music and theater, will co-direct the weekend workshop, which will consider the symbiotic relationship between scholarship and performance.

Partnering with Richard Schoch, professor of drama at Queen’s University Belfast, Winkler says the workshop will consist of hands-on activities, readings and dialogue that will also draw upon the extensive resources and primary source materials of the Folger Shakespeare Library’s permanent collection. Folger Consort Co-Artistic Director Robert Eisenstein will direct the team of professional musicians and Carol Marsh, noted scholar and choreographer, will put the dancers through their paces.

Selected scenes from William Davenant’s musical revision of “Macbeth” and Charles Gildon’s adaptation of “Measure for Measure” (which included interpolated scenes from Henry Purcell’s opera “Dido and Aeneas”) will be collaboratively staged by workshop participants, allowing a deeper understanding of how these plays functioned on a practical level and why they appealed to audiences.

The interdisciplinary weekend aims to set a methodological course for future scholars and performers that links theory with practice.

“All too often we look at a score or a script and interpret only what we see—the notes and words on the page,” says Winkler. “But we know that performers bring (and brought) all kinds of things to the table that are not captured in these static sources. This workshop will give us the opportunity to think about these musical plays as performances—in some cases for the first time since the Restoration era.”

Winkler joined the Syracuse University faculty in 2001 and served as department chair from 2009-2012. She is the author of “O Let Us Howle Some Heavy Note: Music for Witches, the Melancholic, and the Mad on the Seventeenth-Century English Stage” (Indiana University Press, 2006) and “Music for Macbeth” (A-R Editions, 2004). Currently, she is immersed in a book project relating to dance and music in early modern English schools. Winkler earned a Ph.D. in musicology from the University of Michigan.