Medicolegal death investigation (MDI) is the focus of a new graduate certificate program in the Forensic and National Security Sciences Institute (FNSSI), housed in the College of Arts and Sciences. 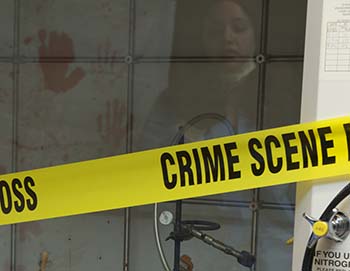 The Advanced Certificate in MDI is a 12-credit-hour program targeting mid-career professionals. It is offered by FNSSI, in conjunction with the New York State Division of Homeland Security and Emergency Services (DHSES).

“We’re proud to partner with DHSES in some of the nation’s first comprehensive educational programs in MDI,” says James T. Spencer, executive director of FNSSI and a Meredith Professor of Chemistry. “The Advanced Program is part of an ongoing effort at Syracuse to better train MDI personnel at multiple levels and from different disciplines.”

Upon completion, students will have a basic understanding of the science behind the techniques used to evaluate MDI evidence. They also will be familiar with the protocols, resources, legal issues and interpersonal strategies involved with MDI practice.

“Our goal is to provide ‘real-world’ information to students so that they can perform objective, accurate and legally defensible medicolegal death investigations,” says Michael Sponsler, FNSSI’s curriculum director who, like Spencer, is a chemistry professor. “It’s important they grasp the scientific principles of biological evidence, whether they’re in a lab, a morgue or the field.”

The Advanced Program was created in response to a recent congressionally mandated report from the National Research Council, which found serious deficiencies in the nation’s forensic science system and called for major reforms and new research.

In creating MDI curricula, FNSSI has worked closely with federal, state and local agencies, including DHSES, the National Association of Medical Examiners and the Scientific Working Group.

“FNSSI has adopted an aggressive, long-term agenda to strengthening the forensic sciences,” Spencer adds. “The advanced program is part of a larger MDI training effort, one that is steeped in strong standards and protocols for analyzing and reporting on evidence.”

FNSSI also offers a 12-credit-hour Undergraduate Certificate in MDI for people who have yet to earn a bachelor’s degree, as well as a new M.S. degree in MDI, the first of its kind in the nation.

Common to all FNSSI programs are continuing education opportunities, such as workshops and conferences; access to world-class facilities; and direct interaction with practitioners in the field.

“We encourage students to design programs that meet their needs,” Sponsler adds. “This personalized approach has made us a model of national excellence.”