Tony Award-winning playwright, performer and activist Eve Ensler will be the next guest in the University Lectures series at Syracuse University on Wednesday, Oct. 15. 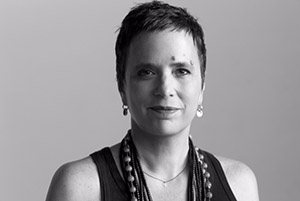 Ensler’s presentation, “In The Body of Justice” will begin at 7:30 p.m. in Hendricks Chapel and is free and open to the public. American Sign Language (ASL) interpretation and Communication Access Real Time (CART) will be available for the lecture.

Her work “The Vagina Monologues” has been translated into more than 48 languages; performed in over 140 countries, including sold-out runs at both off-Broadway’s Westside Theater and on London’s West End (2002 Olivier Award nomination, Best Entertainment); and has run for 10 years in Mexico City and Paris. Her experience performing “The Vagina Monologues” inspired her to create V-Day, a global activist movement to stop violence against women and girls that raises funds and awareness through benefit productions and other artistic works. To date, the V-Day movement has raised over $90 million and educated millions.

Ensler has devoted her life to stopping violence, envisioning a planet in which women and girls will be free to thrive, rather than merely survive. V-Day’s newest campaign, ONE BILLION RISING, launched in February 2012, and has been active on the Syracuse University campus through the student group Students Advocating Sexual Safety and Empowerment.

Ensler traveled to Eastern Democratic Republic of Congo in 2007 to meet with and learn from women survivors of violence. It was these women who birthed the idea of the City of Joy, a place to live in community so that they could heal. V-Day opened the City of Joy with a high-profile ceremony in February 2011 and the first class of women began in June 2011.