When Tesia Kim ’13 began working for Teach for America, she found herself at a medical prep school in Chicago that was so poor, some of her students couldn’t afford binders and notebooks. 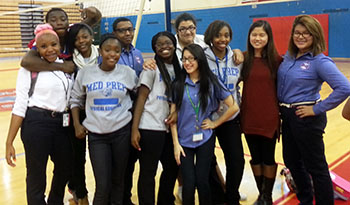 Tesia Kim ’13, second from right. with some of her high school students in Chicago

A recent college graduate with designs on applying to medical school, Kim wasn’t exactly rolling in money either. But that didn’t stop her from finding a way to pay for much-needed classroom supplies and education materials.

Thanks, in large part, to the generosity of the family of Deborah A. Coquillon, Kim is able to provide her ninth graders with a first-class education.

Kim was the inaugural co-recipient, along with Megan Lucas ’13, of the College of Arts and Sciences’ Deborah A. Coquillon Memorial Award. Named for the longtime Syracuse administrator who passed away in 2011, the award goes to an exceptional Arts and Sciences senior who demonstrates the need for financial assistance, in order to pursue his or her post-graduation goals in the public interest.

Coquillon probably would have been proud to know how Kim used the money.

“I purchased school and classroom supplies for the kids, while discreetly helping those whom couldn’t afford field trips,” says Kim, a biomedical science teacher. “Like Deborah, I want to serve my students the best way I can.”

Almost anyone who attended Syracuse during the 1980s and ’90s probably was impacted, in some way, by Coquillon. Originally a staffer in the Maxwell School and then the Office of the Provost, she spent the bulk of her career in the college—first, as a student services coordinator in the Honors Program and, then, as both the director of Career Exploration Services and a pre-law advisor. 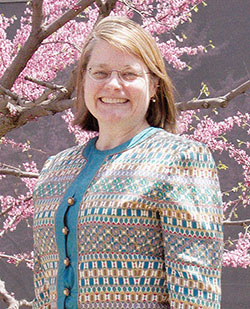 “Deb made sure that each of her numerous advisees developed a truly customized path for intellectual and personal exploration,” says Radke, Dean’s Professor of the Humanities and professor of art history. “Because she got to know her advisees deeply, Deb opened their minds to a range of experiences, well beyond their expectations.”

Coquillon also found time to help establish the college’s Career Coordinating Committee and the Career Services Network; to serve as secretary of the executive board of the Northeast Association of Pre-Law Advisors; and to lead multiple Honors freshman seminars, resulting in a national teaching award in 1994.

After serving as interim associate director of the Honors Program, Coquillon left Syracuse in 2005 for Washington, D.C., where she spent her final years working in the federal government.

“Deborah was a dedicated public servant,” says Kandice Salomone, the college’s associate dean of advising and academic support. “Just as she encouraged students to pursue their own gifts and talents, we have honored her memory by inviting applications from students with various skill sets, interests and career goals. We want to help students who want to help others.”

Like Kim, Rhaiana Campbell ’14 is a Deborah A. Coquillon Memorial Award winner who majored in biology. Campbell applied for the award in hopes of having a financial cushion after college.

“The money helped defray living expenses between the time I graduated from Syracuse and started a yearlong internship in North Carolina,” says Campbell, an Indianapolis native who is training at a psychiatric residential treatment facility in Asheville, N.C. “It’s also helped me put a down payment on a car.”

Surely, these kinds of stories are heartwarming to Coquillon’s two daughters, who have worked with Salomone and development director Frances Hradil to establish the award.

Erzulie (Coquillon) Cruz and Naomi Coquillon have never attended Syracuse, but, as former history majors, they understand the academic importance of the liberal arts. They also have seen the lasting positive impact that their mother has had on many people. 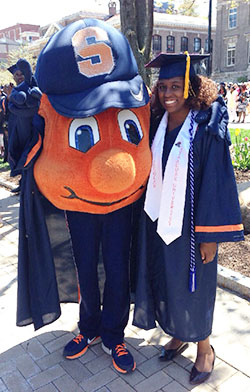 “We hope this award carries forward the energy that she invested in Syracuse University by providing opportunities for students who seek to devote their professional lives to improving conditions for others,” says Erzulie, a New York City-based attorney. “In establishing the award, we recognize that accomplished students often need financial help right after graduation, whether they’re interning, preparing for graduate school or starting a job. We want them to be able to pursue opportunities that further develop their public service experience.”

Naomi, who manages youth and teacher programs at the National Museum of American History in Washington, D.C., echoes these sentiments.

“We’re pleased to support the College of Arts and Sciences,” she says. “In our experience, a liberal arts training helps develop critical thinking, persuasive writing, and effective speaking skills, all of which are necessary for a variety of professions.”

Raised in a lower middle class family, Lucas can attest to the veracity of Naomi’s comments. A month after graduating from Syracuse, she relocated to the nation’s capital in search of work.

“Moving to a new city, where I knew almost no one, was daunting, to say the least,” says Lucas, a dual major in international relations and Spanish. “The Deborah A. Coquillon Award gave me the push and confidence to do what others only dream of, while putting my dreams into action.”

Today, Lucas is an associate with the Advisory Board Co., a global research, technology and consulting firm.

Although the Deborah A. Coquillon Memorial Award is only a few years old, it’s already paying big dividends for its recipients. Kim says the award has taught her a lot about the transformative power of philanthropy and, in the process, has made her a better person.

“It’s frustrating to compare my limited resources to the seemingly unlimited ones my peers enjoy in the corporate world,” Kim says. “School supplies help our students become better prepared for college, so I’m motivated to pay for some of them on my own. The Deborah A. Coquillon Award has helped me do this, while easing the financial stress typically associated with a beginning teacher’s salary.

Kim feels she is getting a crash course in not only science teaching, but also “paying it forward.” 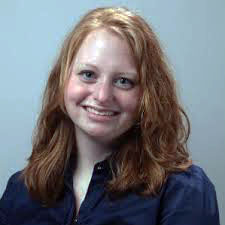 “The Deborah A. Coquillon Memorial Award is incredibly important because it perpetuates the idea of helping others—something that, in turn, leads to invaluable experiences and beneficial rewards for both parties,” says Kim, who hopes to someday contribute to the award. “It has opened doors for me, as an instructor, while helping my students become trailblazers in their communities.”

The daughter of a single mother, Campbell worked her way through college. She admits that receiving the award has “grounded” her.

“It’s humbling to be recognized for things I’ve accomplished,” says Campbell, who is applying to various physician assistant programs. “The award has encouraged me to push forward, to pursue bigger and better dreams. I don’t know what I would’ve done without it.”

Students interested in applying for the Deborah A. Coquillon Memorial Award should contact Jodi Carr at jcarr@syr.edu or 315-443-1643.