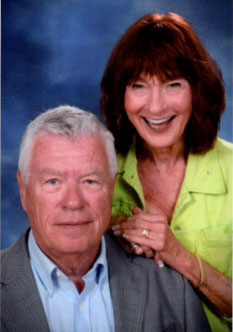 The Janet Kay Smith Feature Twirler Scholarship fund will endow the position in Syracuse University’s “Pride of the Orange” Marching Band (SUMB) known as the “Orange Girl.” The band has featured an Orange Girl since the early 1900s; from 1959-61, when the SUMB was called “100 Men and a Girl,” the position was held by Janet K. Smith, a music major in what is now the College of Visual and Performing Arts (VPA). Through the band she met John Dean, a paper science engineering major at the State University College of Forestry (now SUNY ESF).

“It all started with SUMB, leading to a 50-plus-year marriage—Jan out front in ‘100 Men and a Girl’ and me in the eighth-row clarinet section,” says John Dean, a four-year member of the band. “With a special interest in perpetuating the tradition of the band with its world-class feature twirler, we are pleased to offer the lead gift toward a fully endowed scholarship for that twirler.”

“I appreciate this opportunity to create an endowed scholarship for the future feature baton twirler at Syracuse University,” says Jan Dean. “I hope others will join John and me in this scholarship endeavor. My parents and I worked diligently in many ways to advance my twirling abilities to enhance my opportunities for scholarships. It would be a joy to afford another twirler the opportunity to receive a scholarship while performing with the marching band and acquiring a great education and rich, memorable experiences at Syracuse University.”

“We are extremely grateful to Mr. and Mrs. Dean for establishing this scholarship,” says Justin Mertz, director of the SUMB. “Because of their generosity, we will be able to continue a long-standing tradition of excellence; the ‘Orange Girl’ is a unique feature of the SUMB, and we have been honored to have amazingly talented people in the position, Mrs. Dean included. Every single person to occupy that position is a special piece of the SUMB’s history, and we are excited to be able to offer a scholarship to those worthy of the title.”

To fully endow the Janet Kay Smith Feature Twirler Scholarship, a minimum of $50,000 must be reached. With additional fundraising, the endowed scholarship will last in perpetuity with only the payout from the fund spent each year. For more information on how to support the scholarship, visit the University’s secure, online giving site or contact Jeffry Comanici, VPA assistant dean of advancement, at 315-443-9727 or jjcomani@syr.edu. 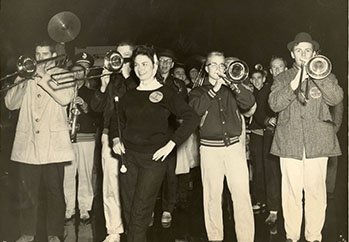 The John Dean Endowed Lacrosse Scholarship Fund will support an undergraduate student on the Syracuse University men’s lacrosse team. The scholarship will allow the student to attend academic classes during the summer. Dean played lacrosse from 1956-59 and is a three-year letter winner. In 2009, he was named a LetterWinner of Distinction by Syracuse University’s Varsity Club.

“The John Dean Endowed Scholarship will be a difference maker for our men’s lacrosse program,” says Syracuse University men’s lacrosse head coach John Desko. “Having the ability to fund summer school credit hours will translate into a competitive advantage on the field. We’re grateful to John and Jan for making this happen!”

“A sense of pride is always attached to fielding respectable, competitive teams with supporting programs and traditions,” says John Dean. “I was privileged to walk on the lacrosse team as a freshman ESF student, and having had some high school experience, immediately saw lots of action and gained a love for the sport.”

In addition to the marching band and lacrosse team, John Dean was a member of the Delta Tau Delta fraternity. Janet Dean was a member of the Hendricks Chapel Choir and Delta Delta Delta sorority. Today they reside in Columbia, Mo., where they are still involved in music, and John holds several advisory roles at the University of Missouri in Columbia.