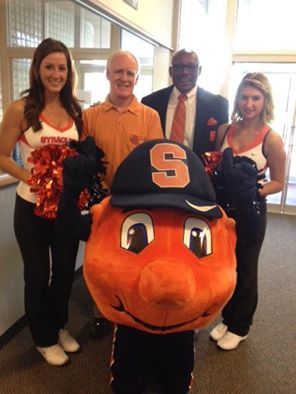 Syracuse Common Councilor Bob Dougherty, second from left, and Floyd Little, football Hall of Famer and special assistant to the SU athletics director, pose with a couple of SU cheerleaders and Otto after Sept. 29-Oct. 3 was proclaimed Orange Out Week.

In a strong show of community spirit ahead of Syracuse University’s ACC home opener against Louisville on Friday, the Syracuse Common Council passed a resolution formally recognizing Orange Out Week. The resolution, sponsored by Councilor Bob Dougherty, was presented to a memorable group of special representatives from Syracuse University, including Otto, members of the cheerleading squad and Otto’s Army. Also on hand to receive the resolution was alum Jason Poles ’98, who helped the Orange to three consecutive Big East football titles from 1996-98, and who served as co-captain of the 1998 squad that played in the Orange Bowl.

More serious City business was momentarily put on hold as the council chambers were filled with clapping, cheering and enthusiastic cries of “Let’s Go, Orange!”.

“Syracuse University athletics are a big passion for many throughout our community, and recognizing Orange Out Week is a great way to build team spirit,” said Syracuse Mayor Stephanie A. Miner.

“Syracuse University does a great deal for our community, from being our largest employer to ongoing civic engagement to providing sports teams around which we rally,” said Dougherty. “I’m pleased to support Orange Out Week as a fun way of cheering on the team and getting Syracuse excited for the team’s first ever ACC home opener against Louisville.”

Floyd Little ’67, former Syracuse superstar and Professional Football Hall of Famer and special assistant to the athletics director, said that the University was honored by this recognition. “We are honored that the mayor and county executive are showing their Orange pride. Thanks to Councilor Dougherty and the whole Common Council for showing their support too. We hope the whole community follows suit, and turns the Carrier Dome Orange for the matchup with Louisville!”

Throughout Orange Out Week, community members are encouraged to display their Syracuse University pride. Several Downtown buildings, including Syracuse City Hall, are illuminated in orange. Syracusans are encouraged to wear orange clothing on Friday to show their support for the football team, which will play its first home game against an ACC opponent, Louisville, this Friday. Through the University’s partnership with the Syracuse Convention & Visitors Bureau, the business and hospitality community is getting involved too. Social media users will observe this week using the hashtag #OrangeOutWeek.

Syracuse University also reminds fans that the Louisville Game is also Dollar Day. Fans can support the University’s United Way campaign by donating on their way into the Dome.

The fun continued with an appearance on local morning show “Bridge Street.”

SU faculty, staff, students, alums and friends: join the fun, show your spirit, and wear orange. Wear it Friday, Oct. 3. The county executive, mayor and common council have all said, “I’m in.” Are you?