Daring, innovative, and bold, “Parade” won two well-earned Tony Awards in 2000. The tragic, true story of Leo Frank, a Jewish man wrongly accused of murder in 1913 Georgia, serves as the basis for a tender love story. As Frank seethes with the injustice of his conviction, his wife, Lucille, finds untapped reserves of love and strength to become his greatest champion. “Parade” is a passionate and powerful work of musical theater. 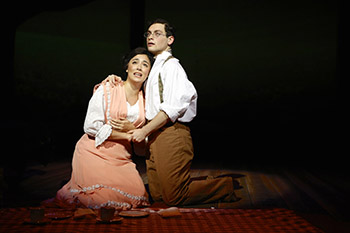 Presented by the Department of Drama in Syracuse University’s College of Visual and Performing Arts (SU Drama), “Parade” performs Oct. 10-19 in the Storch Theater at the Syracuse Stage/Drama Complex, 820 E. Genesee St. Tickets range $17-$19 and can be purchased at http://vpa.syr.edu/drama/tickets, by phone at 315-443-3275, or in person at the Box Office, Monday-Friday, 10 a.m.-5 p.m.

Amid religious intolerance, political injustice and racial tension “Parade” explores the endurance of love and hope against all odds. Its heart-wrenching story offers an unforgettable moral lesson on the dangers of prejudice and ignorance. “Parade” made its Broadway Debut in 1998, and since then has had a successful run on the West End as well as a US Tour.

Playwright Alfred Uhry, best known for his blockbuster play “Driving Miss Daisy,” is one of very few writers to receive an Academy Award, Tony Award and the Pulitzer Prize for dramatic writing. Composer and Lyricist Jason Robert Brown, most recently known for his work on the Tony Award winning show “Bridges of Madison County,” made his Broadway debut with “Parade” and won his first Tony Award for Best Score.

“’Parade’ is one of the best written contemporary shows I have ever worked on,” Director Marie Kemp says. “It’s just so thrilling to work on a piece that you trust completely. The issues in the story are issues we are still dealing with today—issues of racism and of people who have a need to blame someone when they don’t have all of the facts.” She continues to say, “The thing that makes [“Parade”] so beautiful is that it so clearly lays out our choices in life: to love or to hate.”

Kemp has been a professor in the Department of Drama since 1991, teaching classes in musical theater and acting. She has performed and directed regionally and locally for over 20 years.