Nominations Sought for Alumni Awards to Be Bestowed at Orange Central

The Office of Alumni Relations is seeking nominations for the George Arents Award, Melvin A. Eggers Senior Alumni Award and the Generation Orange Award. These distinguished alumni awards will be conferred during Orange Central Weekend, Oct. 9-12. 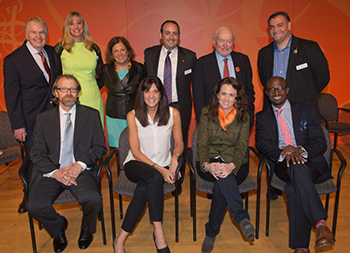 The George Arents Award is Syracuse University’s highest alumni honor, presented annually to alumni who have made outstanding contributions to their chosen fields. The award is named for George Arents, a successful manufacturer who served on SU’s Board of Trustees from 1930 until his death in 1960. Among his many legacies to the University is a fund he endowed in 1939 to establish the George Arents Award, an annual honor recognizing SU alumni for their extraordinary achievements.

Introduced in fall 2013, the Generation Orange Award recognizes young alumni who have made an impact on campus and in their communities through their volunteer work and philanthropy on behalf of SU. The award is conferred at the signature Generation Orange event during Orange Central. Recipients of this award must be part of Generation Orange, meaning they are 35 years old or younger and have graduated within the last 10 years; may not be SU staff members; and must be available to accept the award on campus.

“It is an honor and a privilege for the Syracuse University Alumni Association to confer the University’s highest honors upon our alumni,” says Andrew Laver ’01, Alumni Association board member and chair of the Awards Committee. “We have amazing alumni doing pioneering work in their chosen fields every day. What better way for us to recognize their innovation, hard work and determination than to present our fellow alumni with the George Arents Award.”

“We also have a wonderful opportunity to recognize our senior alumni for their continued loyalty and service to SU,” Laver says. “They are our inspiration and guiding light to continue making SU the great institution it has been for 144 years. And through the Generation Orange Award, we are able to honor our young alumni who have made a significant impact both on campus and in their communities.”

For more information regarding these awards, contact the Office of Alumni Relations at 800-SUALUMS (782-5867) or sualumni@syr.edu.