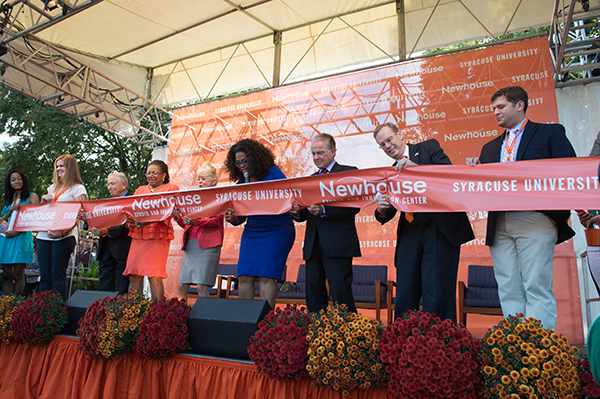 Dignitaries including Oprah Winfrey, center, and Chancellor Kent Syverud, second from right, cut the ribbon to open the Newhouse Studio and Innovation Center.

The Newhouse Studio and Innovation Center was dedicated Monday in a celebration of the new cutting-edge facilities, the people who helped make it happen and the students who will hone and craft their skills at Newhouse in preparing to be the next generation of future communicators.

The ceremonies were highlighted by special guest Oprah Winfrey, who gave remarks and helped cut the ribbon on the new $18 million center that features the Dick Clark Studios and the Alan Gerry Center for Media Innovation.

As thousands gathered outside the S.I. Newhouse School of Public Communications on Waverly Avenue, Winfrey charged the students to live up to the high standards that come with such an impressive new facility.

“Now what matters, that you have received this extraordinary gift, is that you match the gift with your excellence. Energy for energy, excellence for excellence,” Winfrey said. “Let the new generation of innovation come forth.”

Clark recalled how her late husband loved Syracuse and how he loved show business, never thinking of it as work. “I think his wish to all you students would be to find your chosen profession and enjoy it as much as he did and then make a living at it too,” Clark said.

On behalf of her family, Clark thanked those who worked hard to making the Dick Clark Studios a reality. “I just wish Dick could see it. He would be truly amazed and honored,” Clark said.

Gerry also addressed the students, encouraging them to dream. 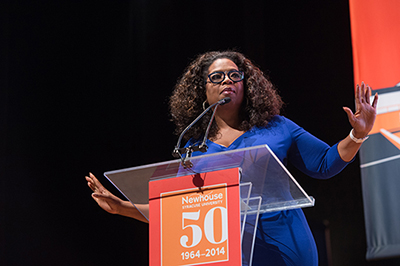 Oprah Winfrey addresses the attendees at the dedication of the Newhouse Studio and Innovation Center.

Inside Newhouse 2, the Dick Clark Studios contain a high-tech entertainment production environment that rivals many Hollywood studios. The Alan Gerry Center for Media Innovation is a creative hub where Newhouse expertise in content development and production will meet the latest media technology and programming trends. The Digital News Center will be dedicated primarily to news, talk and magazine style production, with multimedia capabilities and a file-based digital media environment.

Fifty years ago, “my Dad and Chancellor Tolley had a vision,” Donald Newhouse said, and that was expressed in their campaign for a school of communications. Since then, Newhouse said his family has taken great pride in seeing the school meet the challenges of the ever-changing field of communications, first with the establishment of Newhouse 2 and then Newhouse 3, and now with the new studio and innovation center.

“My family and I envision a great future for the school as it changes and evolves in a field, which is essential to our continuing freedom,” Newhouse said.

Before the ceremonies outside, a dedication was held inside Goldstein Auditorium in the Schine Student Center, with Winfrey as featured speaker and Beth Mowins G’90, play-by-play commentator for ESPN, who led the event.

“To all the students here, you are so lucky,” Winfrey said. “My definition of luck is: Preparation meeting the moment of opportunity.”

Winfrey told her own story of how she was hired at the age of 16 to work at a radio station. She was 19 when she got her break on television news while in college, but she lacked the skills she needed and had to learn on the job.

“You are here in an environment where you can craft your skills, where people care about you, where you can hone and define who it is and what you want to do and how you’re going to use that skill with great passion to go out into the world,” Winfrey said. “The most important thing, I feel, is being able to operate through the interior of your soul and allow the passion of heart to lead you to do the good and great work.”

Winfrey came to realize that broadcast news wasn’t for her, but she did find her passion when she did her first talk show and “found her space in the world.”

“For you all to have the benefit of developing, honing those skills, in such a way that when you step out into the world you already know who you are and what you’ve been called to do, I think it’s the greatest gift,” Winfrey said. “I think the world is in great need of knowing the truth and being able to discern what is the truth and I think that you all are the ones to prepare and to hear it.”

Chancellor Syverud, who also spoke at Goldstein, recognized the students and the faculty who provide them a rigorous education in communications. “These great teachers, these great students deserve top-flight facilities in which to work and today, especially today, they have them thanks to the people here,” Chancellor Syverud said.

Dean Branham noted how the communications industry is one that was “unimaginable” from when Newhouse 1 opened in 1964.

This new center is “symbolic of this marriage of the traditional and the progressive, the past and the future,” she said. “On the 50th anniversary we set our sights on securing the Newhouse School’s pre-eminence for the next generation. These new facilities are a critical new step toward this goal.”