Donald Paul Ely, 84, died at home on Sept. 24 after a long illness. Born Sept. 3, 1930, in Buffalo to Paul B. and Florence Fuller Ely, he received his B. A. from SUNY Albany in 1951. Upon graduation, he commenced a long and distinguished career in the field of education, specializing in the area of audiovisual education/instructional technology. 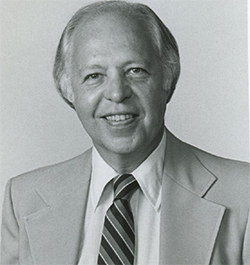 After holding positions at the University of Buffalo, SUNY at New Paltz, and the Hicksville, N.Y., public schools, he began 40 years as a professor at Syracuse University in 1956, where he was appointed full professor in 1970. He earned his master’s degree and Ph.D. there in 1953 and 1961, respectively. While at Syracuse, he founded the ERIC Clearinghouse on Information Resources and served as its director from 1977-1990. He held numerous other administrative appointments as well, and taught as an adjunct professor at the SUNY College of Environmental Science and Forestry. Upon retiring from SU in 1995, he taught at Florida State University during the spring semester for several years.

Ely traveled the world as a consultant and professor, offering his expertise in Chile, Peru, Indonesia, the Netherlands and South Africa. He was the program director for dissemination at the National Science Foundation in Washington during a sabbatical in 1992-93. Among other honors, he received the Excellence in Teaching Award from his alma mater, Albany, in 1996, where he was acclaimed as “a pioneer” in instructional technology, who progressed with it “from the earliest audiovisuals to increasingly complex computer and satellite applications.” He authored numerous books and articles, including his 1971 book, “Teaching and Media: A Systematic Approach,” a seminal work in his field, which he co-authored with Vernon S. Gerlach.

He was a member of several professional organizations, and served on various editorial boards. Among his professional interests was the use of technology in libraries. He attended the White House Conference on Library and Information Services in 1991. He also served on the boards of the DeWitt Community Library and the Onondaga County Public Library.

Ely married Martha Spencer in 1952, and together they raised four boys. He took the whole family with him when he traveled to assignments in Colorado, Chile and Arizona. Ely’s generous spirit extended beyond his family to students, colleagues and everyone he knew. He was unfailingly helpful, positive and supportive, always appreciative of others and untiring in his efforts to be of assistance. He was also a master teacher, instructing and inspiring his students with broad knowledge and great enthusiasm. He will be mourned by people all over the world whom he has known, and with whom he has worked.

Ely was a member of Pebble Hill Presbyterian Church for many years, and served as an ordained elder there.

He is survived by his wife of 62 years, Martha; his sons, Mark (Cindy) Ely of The Villages, Fla.; Scott (Chrissy Leonard) of Carbondale, Colo.; Christopher (Audrey) Ely of Mattydale; his sister, Joyce Moser of Buffalo; his sister-in-law, Rosemary Ely Little of Buffalo; and several nieces and nephews. His youngest son, John, died in 1969, and his younger brother, David, died in 1970.

A memorial service will be held at Pebble Hill Presbyterian Church on Saturday, Oct. 4, at 4 p.m., with the Rev. Peter Shidemantle officiating.

Contributions may be made to the Pebble Hill Church Memorial Fund, 5299 Jamesville Road, DeWitt, NY 13214, or to the Syracuse University Libraries, 222 Waverly Ave., Syracuse, NY 13244.