This image, courtesy of Gannett Digital Media, is a re-creation of the virtual reality farm viewers will see when they click on

The rustle of the corn stalks on a sunny Iowa summer afternoon. The crunch of gravel under the big wheel of a John Deere tractor. The majestic sight of rolling hills and an endless sky, as far as the eye can see. These sights and sounds of a working farm family were brought to virtual life with the help of a Newhouse student and a professor in a recent groundbreaking moment in journalism.

Irfan Uraizee ’15 and Dan Pacheco, Peter A. Horvitz Endowed Chair in Journalism Innovation, worked on the Des Moines Register’s extensive editorial, pictorial and virtual series, Harvest of Change. As part of the series, readers can figuratively “jump into the story,” says Uraizee. With the help of Gannett Digital media, the Register used 3D game interaction and 360-degree video to tell the story.

The story itself literally revolves around a farm family in Page County, Iowa, and the 21st century methods and challenges they face in one of the world’s oldest professions. 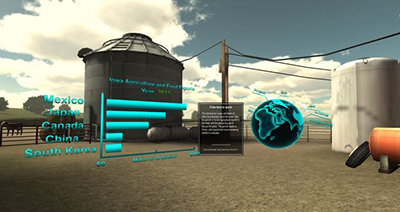 Newhouse student Irfan Uraizee helped create virtual charts like this to better explain the story in the virtual reality world.

“A lot of people my age don’t necessarily watch TV news, but this is different,” says Uraizee. “It allows the reader to decide how they want to explore the story, or to go on a guided tour. The environment is a living breathing world that brings the story to life.”

An Oculus Rift virtual reality viewer is used for the full 3D effect. It’s basically headgear with a viewing screen that puts the reader on a farm, allowing movement from barn to hay bale to tractor. At each stop an icon appears, and by pressing a button on a handheld video game controller, the user opens up video clips, charts to better explain concepts like farm exports, or even game tokens, adding a gamification element to the experience. Users can also, in a virtual reality sense, move around within the video clip simply by moving their head to the left, right, up or down.

“We wanted people, instead of just reading about farms, to feel as though they had been to one that exists in real life,” says Pacheco. “You can go in and explore it without having to be there. We settled on using a farm as the metaphor to discover different aspects of the story. The ‘spine of the book’ or ‘table of contents’ is the gaming environment itself, so instead of reading from front to back in order, you can go through the 3D scene wherever you’d like, and you’re fully immersed in the experience.”

Pacheco sees this as one part of a growing field of what he calls Experiential Media. Over the next decade, media will increasingly move into our environment, and we will move into media, Pacheco says. Your body itself, rather than a mouse, computer or phone, will increasingly become the primary mode of navigation through content.

Pacheco brought an Oculus Rift to Gannett and helped the company locate a 360-degree photo team and 3D modeler from the gaming industry. The process of building the virtual reality farm included 2D photos and videos, which were then superimposed onto Google maps to recreate the scene. Pacheco says, “It was like watching a pop-up book come to life.”

His “wow” moment arrived when he actually stepped foot on the farm after first visiting it virtually. “It was like déjà vu,” says Pacheco. “I felt like I had been there before.”

“What’s really groundbreaking here,” according to Pacheco, “is the merging of techniques from the gaming industry with cutting-edge technology in the form of 360 video (like Google uses for Google maps) in which cameras pointed in all directions capture the video at once and then it’s stitched together.” At different points of the experience, the user fades from a place in the virtual scene to a 360-degree video in the same place, then back into the virtual.

Both student and professor are excited about the possibilities of immersive storytelling, and the role they both played. “As an industry, we’re always trying to figure out different ways in which to engage the end-user,” says Uraizee. “In my opinion, this is the best way yet.”

You can view a 2D version of the project here.

This video highlights the Oculus Rift in action: