University community members had an opportunity to hear more about Fast Forward Syracuse and engage with Chancellor Kent Syverud and 15 committee members in the first of the initiative’s Town Hall meetings Monday at Hendricks Chapel.

Chancellor Syverud set the tone for the event by recalling a recent conversation he had with an alumnus about change at the University. They shared how they both care deeply about the University. 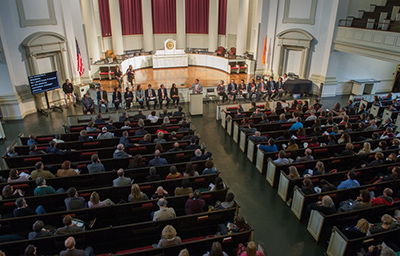 “His immediate response was ‘if we love it, why change?’” the Chancellor told the chapel audience of more than 500 people.

“The real reason to change, if we love the place, is because deep within the culture of this institution is that we’ve been at our best when we’re leading change,” Chancellor Syverud said. “The focus of Fast Forward Syracuse and change is to seize on that culture that we’re all proud of to do things better and smarter than our peers.”

And, ultimately, the greater goal will be met.

“The real reason to change is we owe our students the best,” Chancellor Syverud said.

Fast Forward Syracuse is the University’s transformation initiative to provide the strategic direction and framework for moving the University forward, fostering academic and operational excellence and meeting the challenges in the future—all with students as the primary focus.

Launched in June, Fast Forward has three components: a strategic plan, focused on academics; a campus master plan; and an operational excellence program to help the University be more effective and efficient. The strategic plan and campus master plan, devised by a steering committee and advisory group, respectively, with input from the campus community, will go before the Board of Trustees in May.

In regards to the strategic plan, some of the areas that are being looked at include undergraduate excellence, strategically focused research in doctoral programs, leadership in veterans and military affairs and student and faculty centered operations.

In the area of operational excellence, which has set a goal of realizing a $5 million yearly savings over a multi-year period, initial solutions have emerged in areas that include reducing administrative burdens in sponsored research, speeding up human resources processes, improving fundraising tracking and developing new processes of policy adoption and communication.

More than 80 faculty, staff and students have been working on the various committees, teams and workgroups of Fast Forward, said College of Law Professor LaVonda Reed, a member of the executive and steering committees of Operational Excellence, who opened the Town Hall event. Several members of the various committees sat on the stage at Hendricks, while other members were in the audience.

More than 200 faculty and staff have so far provided information and input to the initiative, Reed said. The Town Hall was another way to gather insights with the University community to help inform the work of Fast Forward.

During the frank question-and-answer session, one audience member asked about the one-year timeline for the components of Fast Forward and how to keep the momentum going beyond that.

On the strategic plan, Vice Chancellor and Provost Eric Spina said the steering committee is focused on the plan as a “living plan.”

“We don’t expect what we do today or this year as a university community to necessarily set the definitive path over the next five to 10 years,” Spina said. “We’re very much focused on metrics and assessment and working in the ability to change.”

Over the coming year, the schools and colleges will have a chance to think about how their missions and visions can be best aligned with the University direction, Spina says.

A student questioned the panel about how much input students will have on the campus master plan.

School of Education Professor Corinne Smith noted that all of the firms that presented bids to assist with the master plan described how they would be on campus many times to meet with University community members, including students, to discuss concerns and gather information. A survey and forums would also be in the works.

Another audience member questioned if the committees are considering the changing demographics of the United States and the growth of the Latino population—and the need to reflect that among faculty and administrators.

Another audience member asked questions about the composition of the committees and workgroups. 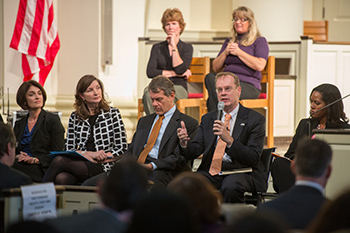 Branham agreed there needed to be representation on the committee by staff members who support students and faculty. “There are many cases in which they are the backbone of operations and we felt we needed to, we would be remiss in fact, if they were not included in that,” she said.

“What I’ve seen about my colleagues is that the insiders are the most open to self-critique,” Chandler-Olcott said. “A lot of them have had ideas about how to move forward in different ways, they just haven’t had a forum where they could organize those ideas and band with other people to enact them.”

One of the last questions from the audience involved whether the strategic plan would be distinctive from other universities.

Graduate student Patrick Neary, president of the Graduate Student Organization and a member of the strategic plan steering committee, noted committee members are diligently thinking about what will make the best Syracuse possible and what makes it distinctive. “I have been, especially as a student leader, very excited to talk about the fact that we’re looking to generate a plan that has an edge, that is pointed, that does lend itself to the unique institution that we are,” he said.

The members of the panel at the Town Hall were the following: