Scholars from North and South America will descend on campus for the 13th biennial conference of the Recovering the U.S. Hispanic Literary Heritage Project (a.k.a. the Recovery Project), running Oct. 9-11. The purpose of the conference is to celebrate writers, critics and thinkers of Hispanic descent who have shaped U.S. history from the 16th century onward but have been forgotten or ignored.

For more information, including a complete schedule of events, contact Silvio Torres-Saillant, professor of English, at saillant@syr.edu.

“This is the first time that the Recovery Conference has come to the Northeast,” says Torres-Saillant, who is co-organizing the event with Myrna García-Calderón, associate professor of Spanish and director of the Latino-Latin American Studies Program. (He and García-Calderón have been working with a campus-wide faculty planning committee.) “I look forward to a substantial discussion about the long history of writing by U.S. Hispanics, with some of the most accomplished scholars in the field.”

The conference is sponsored by the Recovery Project, a national program based at the University of Houston that locates, identifies, preserves and disseminates the literary contributions of U.S. Hispanics from colonial times to 1960. 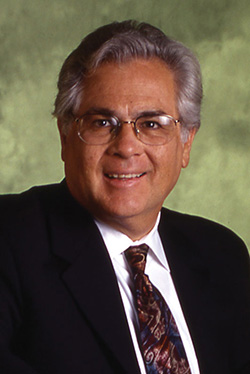 Additional support comes from the University of Houston; EBSCO Information Services; Syracuse’s Office of the Chancellor and Office of the Vice President for Research; the College of Arts and Sciences (including the Latino-Latin American Studies Program; the Department of Languages, Literatures, and Linguistics; the Department of English; La Casita Cultural Center; and the Office of Cultural Engagement for the Hispanic Community); the School of Education; the S.I. Newhouse School of Public Communications; University College; and the Program on Latin America and the Caribbean, based in the Moynihan Institute of Global Affairs in the Maxwell School of Citizenship and Public Affairs.

Attendees include literary scholars, historians, and media and cultural studies specialists interested in establishing the longevity of the U.S. Hispanic legacy—beginning with Juan Ponce de León’s arrival in Florida in 1513 and ending in 1960.

“Since then, the story of U.S. Latinos has become more familiar with the general public,” Torres-Saillant says.

One special guest is Houston’s Nicolás Kanellos, the Brown Foundation Professor of Hispanic Studies and director of both Arte Público Press and the Recovery Project. He will be joined by scholars from more than a dozen other institutions, including Columbia University, the Massachusetts Institute of Technology and the Monterrey Institute of Technology and Higher Education (Mexico).

“Although Spanish and Hispanic-descended people figure prominently in U.S. history, their contributions have been marginalized,” says Torres-Saillant. “Our goal [with the conference] is to share findings, offer new directions for research and assess the inroads this research is making, in hopes of moving us toward a more inclusive narrative of American literary and cultural history.”

The schedule includes the following:

• Opening remarks by Eric Spina, vice chancellor and provost; and Karin Ruhlandt, interim dean of the College of Arts and Sciences

• Ten panel discussions, with topics ranging from “Political Discourse in Periodicals” and “Transnational Print Circuits” to the “Radical Potential of Print”

• Nine panel discussions, whose topics include “Immigrant Print Culture” and “Reimagining the Dominican Presence in the United States”

“The Hispanic heritage of the United States is inscribed in the taxonomic study of the names of places colonized by Spain,” says García-Calderón, referring to the preponderance of Spanish-named states, cities, rivers and mountains. “Ironically, the names of the many Spanish people who have influenced these areas, particularly in Florida and Louisiana and along the West Coast, are lost. We need to right this wrong.”

The Recovery Project is the largest of its kind devoted to the study of Hispanic culture and literature in the United States. Since 1990, it has made hundreds of thousands of literary and historical pieces—including essays, autobiographies, diaries and letters—available to the public. The Recovery Project has received many honors and awards, the most recent of which is the Society of American Archivists’ 2014 Diversity Award.