As part of Orange Central 2014, the Traditions Commission presents “An Evening with John Mulaney” on Saturday, Oct. 11, at 8 p.m. in Goldstein Auditorium. Tickets are available at the Schine Box Office beginning Monday, Sept. 29. Tickets are $5 for students and $7 for faculty and staff. 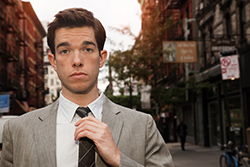 Mulaney was named one of Variety’s 10 Comics to Watch in 2008, the same year he began working at Saturday Night Live. In 2009, Mulaney released his first special, “The Top Part,” and in 2012 released his second Comedy Central Special and album, “New in Town.” His new show, “Mulaney,” premieres on FOX on Sunday, Oct. 5.

This is the first time the Traditions Commission has hosted a comedy show during Orange Central.

For more information, contact Courtney Jones, assistant director in the Office of Student Activities, at cejone02@syr.edu or 315.443.2718. Additional information on this event and other Orange Central activities is also available on the Orange Central website.