The Department of African American Studies (AAS) in the College of Arts and Sciences will host a symposium in commemoration of the 50th anniversary of Chinua Achebe’s landmark book “Arrow of God.” The event, which is free and open to the public, is one of many such celebrations taking place around the world to honor the late Nigerian author. The symposium is Friday, Oct. 17, from 8 a.m.-6 p.m. at the Crowne Plaza Syracuse (701 East Genesee St.). 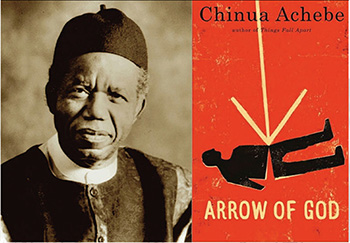 Chinua Achebe, left, and the cover of his book “Arrow of God”

The symposium is co-convened by Meredith Professor Micere Githae Mugo and Associate Professor Herb Ruffin, both in AAS. For more information, please contact the Department of African American Studies at 315-443-4302 or aas@syr.edu. You can also visit the symposium’s website at http://aas.syr.edu/about/achebecommemoration.html.

“The symposium will celebrate the achievements of one of the most important African writers of the last hundred years. Achebe’s writing has had a significant impact on not only African and African American studies, but also on literature, as a whole,” Mugo says.

Also known for books such as “Things Fall Apart,” “No Longer at Ease” and “A Man of the People,” Achebe made substantial contributions to the field of African literature before his death in 2013. “Arrow of God,” his third novel, discusses the Igbo people of Eastern Nigeria and their resistance against British colonialism, which sought to use Western education and Christianity to destroy their culture. The symposium will honor Achebe as an icon of world literature.

Presenting the keynote address is Biodum Jeyifo, professor of African American studies and comparative literature at Harvard University. The symposium will also include a series of roundtable discussions featuring scholars from institutions such as Central Michigan University, Cornell University, the London Metropolitan University Research Institute and Princeton University, among many others.

“The event is a celebration of a novelist whose influence spanned the entire world,” Ruffin adds. “We have an impressive list of academics from around the world participating and I hope attendees will take advantage of the opportunity to hear such worldly scholars discuss Achebe’s global impact.”