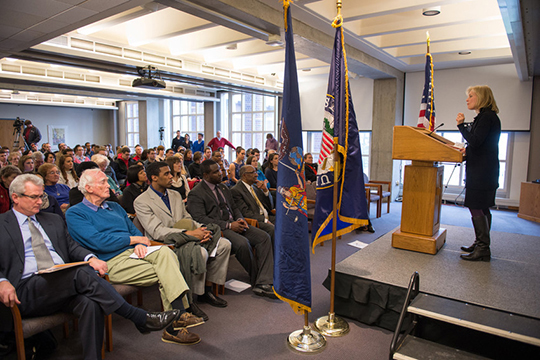 The Carnegie Corp. of New York has named the Maxwell School of Citizenship and Public Affairs as one of five institutional recipients of $1 million, two-year grants through its initiative “Rigor and Relevance:  Bridging the Academic-Policy Gap.”  With this funding, the Maxwell School will create the “Carnegie International Policy Scholars Consortium and Network,” which will bring together faculty from a number of top international relations graduate programs to teach and mentor students, scholars and policy makers about ways to prepare graduate students for successful careers in both policy making and academia—and thus to foster enhanced interaction between the two communities.

“We are excited and honored to receive this Carnegie Corp. grant that will support efforts to prepare a new generation of thought leaders to be successful and influential both in the academic world and in the world of practice, bridging the gap between the two,” says Maxwell School Dean James Steinberg.  “With this funding, we will develop educational materials and innovative instructional approaches that combine intellectual rigor with the ability to adapt that thinking to the constraints of real-world decision making. Through the Carnegie International Policy Scholars Consortium and Network, we seek to bring an interdisciplinary approach to complex international affairs and to build a network of faculty and students across multiple institutions to pursue these goals.”

Initial consortium members include faculty from Duke University, the Massachusetts Institute of Technology, Indiana University and the University of Virginia, as well as scholars from CSIS and the American Academy of Arts and Sciences.

The grant will support curriculum-building, opportunities for mentorship, conferences and workshops, and the creation of a synchronous, distance-learning environment based at Syracuse University—the “Distance Learning Collaboratory”—that will allow students in international relations and security studies to interact with faculty members and other students in the consortium schools in real time. The goal of the project is to improve the communication between academics and policy makers and thereby produce better policy making and more policy-relevant research and teaching.

The five grant awardees had responded to the corporation’s competition challenging the 22 American-based members of the Association of Professional Schools of International Affairs (APSIA) to present proposals outlining novel, feasible ways to bridge the gap between academics working on complex foreign policy issues and policy makers dealing with the same concerns.  All proposals were reviewed by experts in the international relations field who were chosen for their understanding of the policy making process in Washington, D.C.; knowledge of APSIA; and awareness of the administrative challenges of universities.

Dean Steinberg observes that, “Carnegie’s Rigor and Relevance initiative is a reflection of the corporation’s long-term commitment to supporting the strengthening of ties between universities and policy making.”  This new grant builds on an existing project at the Maxwell School, funded by both the Carnegie Corp. and the Smith Richardson Foundation, “Toward a New Approach to the Advanced Study of Security and International Affairs.”

This new grant will be managed through the Moynihan Institute of Global Affairs at the Maxwell School, and will be co-led by Steinberg; Margaret Hermann, Gerald and Daphna Cramer Professor of Global Affairs and director of the Moynihan Institute; and Francis J. Gavin, Frank Stanton Chair in Nuclear Security Policy Studies and professor of political science at the Massachusetts Institute of Technology.