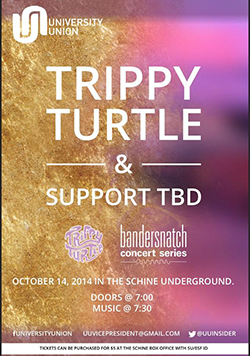 EDM artist Trippy Turtle will headline the first show of University Union’s Bandersnatch Music Series for the 2014-2015 school year, on Oct. 14 in the Schine Underground.

Known for his eccentric personality and regularly performing in a turtle costume, the young DJ attracted the attention of Diplo in 2013, who signed him to his Mad Decent record label, known for launching the careers of leading EDM acts like Major Lazer, DJ Snake and Baauer. Earlier in 2014, Trippy Turtle collaborated with   Ariana Grande on her hit song “Be My Baby” and has remixed artists like Chris Brown, Ed Sheeran and Robin Thicke to mass critical acclaim. He also became a regular on the summer music festival circuit this year, making appearances at the Electric Forest Festival, the Snowball Music Festival and HARD, alongside artists like Zedd, Tiesto and Disclosure. On Sept. 12, he headlined his largest show to date, at New York City’s Webster Hall, where he played to a crowd of 1,400. Trippy Turtle has also been selected by this year’s Juice Jam headliner, Dillon Francis, to be an opening act on his upcoming world tour, which will include a stop at the Barclays Center in New York City.

Tickets for the show are on sale at the Schine Box Office for $5. Tickets are available to all Syracuse University and SUNY ESF students. Doors for the event will open at 7 p.m., and a valid college I.D. is required to gain entry to the venue, as well as to purchase a ticket for the event.