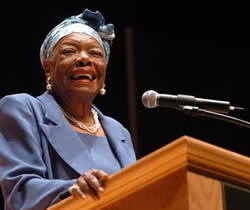 The read-outs are part of a major initiative called “Black and Banned.” They will take place on Thursday, Sept. 25, from 5-7 p.m. at the Beauchamp Branch Library (2111 S. South Salina St., Syracuse) and on the following day, from 2-5 p.m. in the Martin Luther King Jr. Memorial Library (231 Sims Hall) on campus.

Both events are free and open to the public. For more information or to register to read, contact Joan Bryant, associate professor of African American Studies (AAS), at 315-443-4399 or jobryant@syr.edu.

“We’re celebrating the freedom to read, particularly among the African American community,” says Bryant, who organizes “Black and Banned,” now in its third year. “We’re joining people all over the country—librarians, booksellers, publishers, journalists, teachers and readers—to support free and open access to information, drawing attention to the history of censorship.”

Bryant says this year’s “Black and Banned” honors the memory of Maya Angelou and Walter Dean Myers, both of whom recently passed away. Angelou’s “I Know Why the Caged Birds Sings” (1969) and Myers’ “Fallen Angels” (1988) are among the nation’s top-100 banned books.

“Maya Angelou and Walter Dean Myers are the tip of iceberg,” she says, referring to the large number of African American authors whose books have been banned and challenged. “Our events salute banned books dating back to the 1830s.”

“While books continue to be banned, they remain available, thanks to people who stand up and speak out for the freedom to read,” Bryant says. “Black and Banned’ is a celebration of not only reading, but also intellectual freedom.”

“Black and Banned’ is a program of the Black Syracuse Project, administered by the College’s Department of African American Studies. Additional support comes from the Beauchamp Branch of the Onondaga County Public Library, F.O.R.C.E. (Focusing Our Resources for Community Enlightenment), and Lit’ for Life (a public literacy project).