The Democratizing Knowledge (DK) Project at Syracuse University will host Diana Ferrus, internationally renowned poet and storyteller, who will deliver a performance lecture entitled “From Broken Bones to Healing Hearts: My Journey with Sarah Baartman” at Peter Graham Scholarly Commons at Bird Library on Monday, Sept. 29, at 5 p.m. Ferrus wrote the famous poem “I’ve come to take you home,” which inspired the French government to return Sarah Baartman’s dissected remains to South Africa. 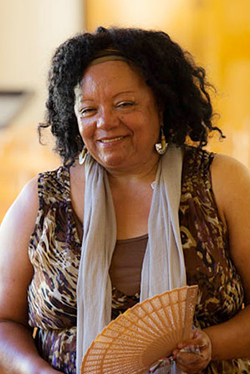 In 1810, an indigenous South African woman named Sartjie “Sarah” Baartman was taken away from South Africa under false pretenses to be paraded as a sexual freak in Europe. After death, her body, brain and genitalia were left on display in the Musee de l’Homme in Paris. The South African indigenous people, and even Nelson Mandela appealed to return her remains but those pleas were rejected.

In 2001, French senator Nicholas About successfully introduced a bill to return her remains and presented Ferrus’ poem “I’ve come to take you home” to demonstrate the emotional and psychological effects of her museum exhibit on the people of South Africa. Ferrus’ poem was published in French law, a first in French history. Ferrus and a delegation from South Africa collected her remains and laid her to rest in 2002.

“Ferrus’ work is regularly taught in curricula dealing with the complexities of race and gender,” says Distinguished Professor of Women’s and Gender Studies and long-term member of the DK Project Chandra Talpade Mohanty. ”Her continuing work as an activist, educator and storyteller has been influential in South Africa and has had significant impact on world-wide dialogues on race, sex and reconciliation.

In 2007, Ferrus received the Minister’s Award for Women from the Western Cape Provincial Department of Arts and Culture for her contribution to the empowerment of women. In April 2012, the Metro East unit of the Western Cape Education Department launched the Diana Ferrus Writing Project.

The event is hosted by the Democratizing Knowledge (DK) Project: Developing Literacies, Building Communities, Seeding Change. Comprised of Syracuse University faculty and graduate students, the DK Project works on constructing ways of decolonizing and democratizing knowledge, and revitalizing and transforming the reach of these knowledges to address difference, identity, equality, justice and citizenship.