Syracuse Symposium continues its fall theme of “Perspective” with a popular lecture by Mark Trodden and a seminar by Kameshwar Wali, physics professors with ties to the College of Arts and Sciences.

Trodden is the Fay R. and Eugene L. Langberg Professor of Physics at The University of Pennsylvania and a former Syracuse faculty member. He will present “Embracing the Dark Side: In Search of the Missing Pieces of the Cosmic Puzzle” on Thursday, Oct. 2, at 4 p.m. in the Kilian Room (500) in the Hall of Languages.

Trodden’s presentation marks this year’s Kameshwar C. Wali Lecture in the Sciences and Humanities, co-sponsored by the Department of Physics and the Syracuse University Humanities Center. The lecture is named for Wali, who is Syracuse’s Steele Professor of Physics Emeritus. The event is free and open to the public.

The following day (Friday, Oct. 3), Wali will explore “The Split Face of Science: Is Science an Endangered Species?” at noon in the Tolley Humanities Building. Space is limited, and reservations are required. To RSVP for Oct. 3, email Karen Ortega in the Humanities Center at kmortega@syr.edu.

“These back-to-back events look at science from a framework that reaches out to the humanities and other fields,” says co-organizer Eric Schiff, professor of physics. “Mark Trodden will provide a popular, up-to-the-minute description of cosmology, which is the scientific field dealing with the origins of the universe and, thus, of life, itself. Kameshwar Wali will argue that scientific research has arrived at an intellectual crossroads.”

At Penn, Trodden also serves as chair of the Department of Physics and Astronomy and as co-director of the Center for Particle Cosmology. He is a renowned theoretical cosmologist and particle physicist who lectures frequently, blogs for Discover Magazine, and has been an author for Scientific American.

Trodden has previously served on the faculties of Syracuse (2000-09), Case Western Reserve University (1997-2000), and the Massachusetts Institute of Technology (1995-97). He earned a Ph.D. from Brown University and master’s and bachelor’s degrees from Cambridge University.

“For most of the past century, physicists have pushed our understanding of the microscopic world down to ever-smaller sizes, splitting the atom to reveal its inner workings and making astonishing new discoveries, the most recent of which has been the Higgs particle,” Trodden says. “At the same time, other scientists—astronomers—have looked to the skies for the ‘big picture’ of the universe, peering beyond our galaxy and looking back toward the beginning of time. … My lecture will explore how modern cosmology weaves together these seemingly distinct strands of knowledge, turning our telescopes into microscopes and allowing us to read the hitherto unknown dark side of the universe.”

Trodden’s presentation will be followed by a book-signing by Wali and by his daughter Monona, author of the novel “My Blue Skin Lover” (Blue Jay Ink, 2014). 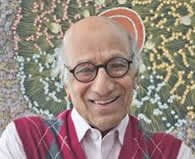 Wali is internationally recognized as a theorist, namely for his research into the symmetry properties of fundamental particles and their interactions, and as the author of “Cremona Violins: A Physicist’s Quest for the Secrets of Stradivari” (World Scientific, 2010) and “Chandra: A Biography of S. Chandrasekhar” (University of Chicago Press, 1991).

A Syracuse faculty member since 1969, Wali has held additional positions at Harvard University, the University of Chicago, Northwestern University, Ben-Gurion University of the Negev (Israel), Institutes des Hautes Etudes Scientifiques (France) and the International Center for Theoretical Physics (Italy). He is a fellow of the American Physical Society (APS), a winner of the “Scientist of the Year” award from APS’s India chapter and a recipient of the Syracuse Chancellor’s Citation for exceptional academic achievement.