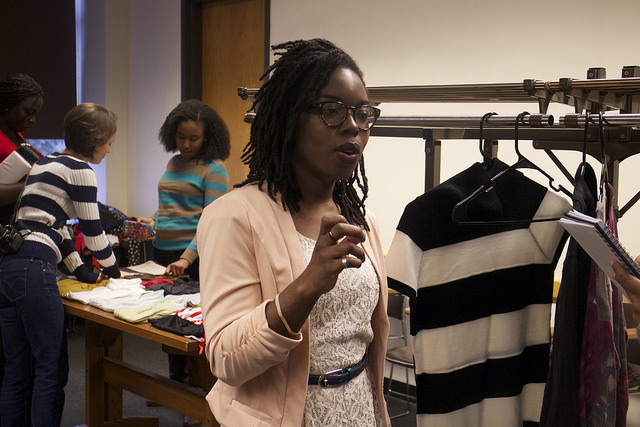 Timi Komonibo G’15 still has one of the best finds she’s ever discovered at one of her organized clothing swaps: a coral pinafore dress.

“I saw it and I thought ‘Why would anyone give this away?’” she says. “It’s always been something I really enjoy wearing. That’s the great thing about swaps—it’s truly one man’s trash is another man’s treasure.”

A public diplomacy student in the Maxwell and Newhouse schools, Komonibo has been organizing clothing swaps for several years—events in which participants bring several gently used garments or accessories to trade for other pieces.

Komonibo started during her undergraduate years in her home state of Texas and branched out to the Syracuse University campus last year, when she created her nonprofit organization, Style Lottery.

“The goal is to challenge women to be stylish and not trendy, because being trendy is not very sustainable,” she says. “We wanted to make sure that people were cultivating their own personal style.” 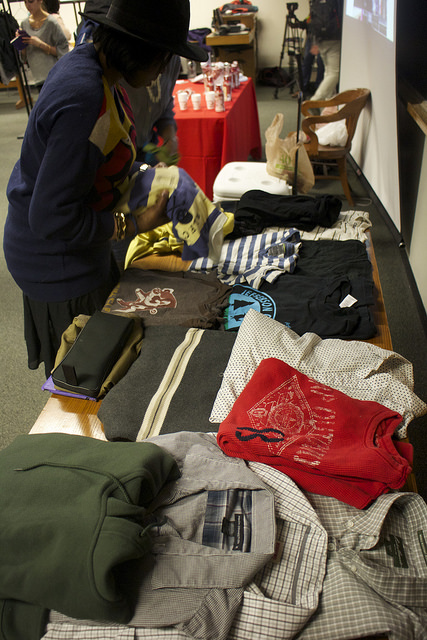 “Our pilot was well-received and very encouraging, and it let us know people were interested,” she says.

It’s a fun, social experience, but the value in the Style Lottery comes in many layers for Komonibo—and in its mission of restyle, reuse and reward.

It helps college students and others who might not have the budget to create their look, and it cuts down on clothing discarded for no other reason than it’s not wanted.

Some of the clothing left from the swaps also finds new life with women in the community.

“Sometimes we get criticism for not really knowing much about the communities around us,” Komonibo says. “So we’ve had the opportunity to give back to the community and partner with organizations to help women.”

Some of the clothing donated and left over at last semester’s event went back into the Style Lottery’s inventory, but a third went to the Rescue Mission and another percentage went to a group of women through Exodus 3 Ministries, which helps women and children in need.

The Style Lottery recipients “shopped” among the clothing and were given a makeover for Syracuse University’s Martin Luther King Jr. Celebration, which they were attending that night.

“We exist to walk alongside those organizations and support what it is they are doing. We happen to have fashion as our way of doing that,” says Komonibo, who hopes to replicate the closet swaps with various Syracuse organizations.

This semester’s first Style Lottery event is being supported in part with funds from a Fast Forward grant. The grant comes from a competition held as part of Chancellor Kent Syverud ’s inauguration in which funding was awarded to 13 student projects that show how Syracuse and its students are having a positive impact on the world.

Komonibo and her team, which submitted a video for the competition, are using the funds to purchase tables and clothing and shoe racks, instead of borrowing equipment. The competition also helped get the word out about the Style Lottery. 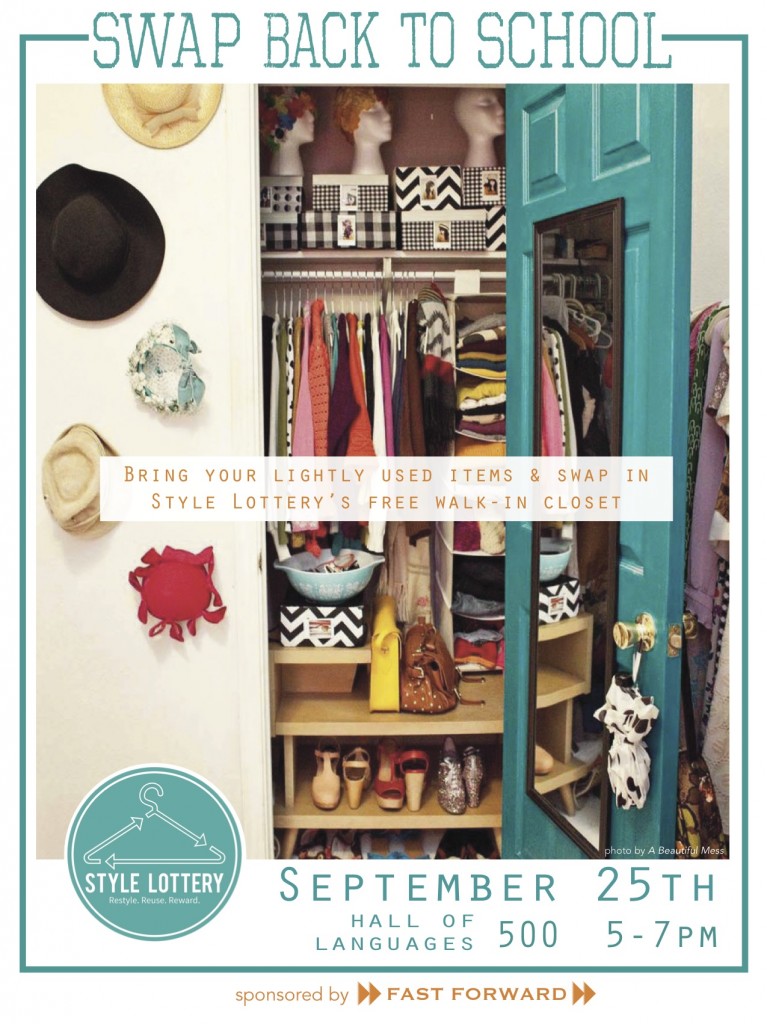 For the upcoming event, all members of the University community are invited to attend. The only requirement is to bring at least five gently used items of clothing, accessories or shoes.

“People come with clothing thinking no one would ever want it, but you’ll see others get so happy when they find that certain piece in the swap,” she says. “That’s how I felt when I saw that pinafore, because it was very nostalgic of my uniform days when I was a kid.”

The brightly colored dress is a favorite article of clothing, but her favorite part of the closet swaps is the people that she meets.

“I’ve met people from different walks of life,” Komonibo says. “They are fashionable but at the same time they are sensitive shoppers who think about issues, think about sustainability, think about the people who might benefit from their clothing.”

It’s something Komonibo wants more people to be thinking about.

“My life goal is to make philanthropy easy for people. A lot of people don’t do it because they think it’s a daunting task,” Komonibo says. “We just need to figure out how you’re best positioned to help people in your community.”