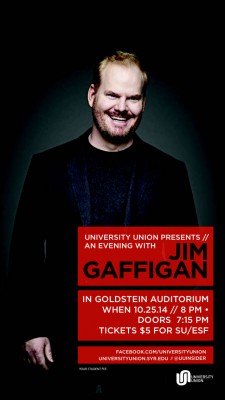 Gaffigan’s most recent comedy album, “Obsessed,” debuted at #1 on the Billboard Comedy Album charts in April 2014, and the accompanying television special on Comedy Central has been the most-watched program of the year on the network. As an author, Gaffigan appeared on the New York Times Best Seller List for 14 consecutive weeks in 2013 and has been named one of the “25 Funniest People on Twitter” by Rolling Stone. He is also a frequent late night television personality, having made multiple appearances alongside David Letterman, Jay Leno, Conan O’ Brien, Jon Stewart and Jimmy Fallon in the past.

Tickets for An Evening With Jim Gaffigan went on sale at the Schine Box Office Monday, Sept. 15 at 9 a.m. for $5. Fifteen hundred tickets will be available to all Syracuse and SUNY ESF students, staff and faculty. Doors for the event will open at 7:15 p.m., and a valid college, staff or faculty I.D. is required to gain entry to the venue, as well as to purchase tickets for the event.