BE Wise Kicks off Campus Campaign at Third Annual BE-BQ on Sept. 19

The BE Wise campaign within the Division of Student Affairs is kicking off its yearlong campaign at the third annual BE-BQ event this Friday, Sept. 19, from 5-8 p.m. on the Quad. The campaign strives to generate awareness of alcohol poisoning, how to avoid it, its signs and how to respond to it. 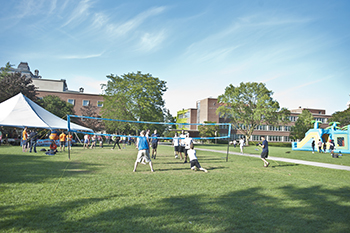 Participants play volleybal at last year’s BE-BQ on the Quad.

The BE-BQ is free and open to all students. There will be barbecue food, lawn activities and a volleyball tournament. Additionally, four musically talented students, Arson Aliyev, Paige Carlotti, Joel Ramtahal and Victor Suarez, will be participating in a DJ competition at 6 p.m. Students who attend will be able to text in votes and the final winner will be recognized by the BE Wise campaign and its branded character, Party F. Owl.

BE Wise is an award-winning campaign that began in spring 2013 as a way to build awareness of alcohol poisoning at Syracuse University. Its goal is to creatively engage students and equip them with the knowledge to make safer decisions, as opposed to telling students not to drink. The Division of Student Affairs has been working with the Newhouse-based student public relations firm Hill Communications,which helped craft the campaign’s messaging, as well as develop the marketing and promotional strategies. In 2013, BE Wise was awarded first place by the Substance Abuse and Mental Health Administration’s national Technology Based Products to Prevent High Risk Drinking among College Students National Challenge. In this same year, Hill Communications was awarded Best Campaign by a Student-run Firm by the Public Relations Student Society of America (PRSSA) for its work on the BE Wise campaign.

There are three central pillars to the BE Wise campaign: BE Real and know your limits; BE There and make the call when someone is in need of help; and BE Aware by knowing the signs of alcohol poisoning. The campaign uses the acronym C.U.P.S to remind students of the signs: cold skin, unresponsiveness, puking and slow breathing.

For questions, to schedule a BE Wise Training or inquiries about integrating the campaign into existing programs and curriculum, contact subewise@syr.edu.

NFL, Eagles and Chiefs All Set To Win The Economics Game In Super Bowl LVII

Rodney Paul, director and professor of sport analytics in the Falk School, was quoted in the Washington Examiner story “The economics of the Super Bowl: Hosting, gambling, ads, and more.” The article talks in-depth about all of the economics that…

Arlene Kanter, director of the Disability and Policy Program and professor in the College of Law, was interviewed for the Business Insider article “Some CEOs are pushing workers to return to the office, but it could come with a cost:…

Tristan Martin, assistant professor of marriage and family therapy in Falk College, shared his expertise in the Newsweek article “Dad’s Reason for Refusing to Walk Daughter Down the Aisle Sparks Outrage.” The article highlights an uncle who is being publicly…

Nothing But Positive Reviews About New Apple HomePod Speaker

James Abbott, Professor of Practice & Chair in the Sentor School of Music in the College of Visual and Performing Arts, was quoted in the Lifewire story “How Software Upgrades Improve Audio Quality in Apple HomePod and Other Devices.” The…