Forensic firearms analysis is the subject of a new graduate certificate program offered by the Forensic and National Security Sciences Institute (FNSSI) in the University’s College of Arts and Sciences. 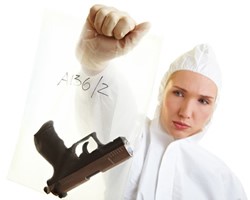 The new certificate program is offered by the Forensic and National Security Sciences Institute.

“Even after an examiner is hired, he or she must undergo at least two more years of training before being able to work independently,” says James T. Spencer, FNSSI executive director and Meredith Professor of Chemistry. “This training comes at great expense to the hiring agency, which is usually small and unable to train multiple candidates at once. Our goal is to provide this training, in a compact and concise manner, for examiners at the federal, state and local levels.”

The certificate program contains three gateway courses: two titled “Firearms and Impression Evidence” (FSC 661 and 671) and one titled “Quality Assurance and Ethics” (FSC 663). The first two courses are the brainchildren of Matthew Kurimsky, an FNSSI-affiliated research faculty member who is an examiner in the Firearms section of Onondaga County’s Wallie Howard Jr. Center for Forensic Sciences.

“Even though this program stops far short of what AFTE requires, it’s a great complement to on-the-job training,” Kurimsky says.

Whereas FSC 661 is a lecture and laboratory course, covering a range of topics (e.g., types of ammunition, trace evidence and gunshot residue, and shooting reconstruction), FSC 671 is largely an independent immersion course.

“In FSC 671, students gain extensive experience with comparison microscopes and the detailed analysis of ballistics and firearms evidence, doing their own analysis of numerous case evidence sets, as well as writing full reports that document their results,” says Michael Sponsler, FNSSI’s curriculum director who, like Spencer, doubles as a chemistry professor.

“Quality Assurance and Ethics” is designed to familiarize students with the International Organization for Standardization, as it relates to accredited forensic laboratories. Close attention is paid to ethical decision making; root-cause analysis; corrective action; legal ethics; and the interplay among police officers, attorneys and forensic scientists.

In addition to the gateway courses, students must complete a relevant elective. Choices include courses in light microscopy, latent prints, forensic photography or an approved related topic.

“After completing the program, students will have a superb foundation for a career as a firearm and tool mark examiner,” says Spencer, adding that AFTE certification is not part of Syracuse’s certificate program, nor is the latter endorsed by AFTE.

FNSSI applies broad, interdisciplinary scientific research and theory to real-world legal and security issues. In addition to multiple graduate and undergraduate opportunities, FNSSI is home to a new state-of-the-art laboratory suite, dedicated to the study of bioforensics and high-energy materials.