Last month, Syracuse University doctoral student Bin Peng got the chance to meet, and to learn from, some of the most brilliant minds in the field of economics. 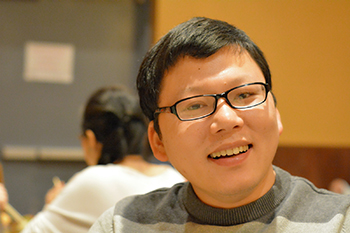 Peng, a student in the Maxwell School of Citizenship and Public Affairs, was one of 400 young researchers from 40 different countries (and one of 29 from the United States) who were selected to attend the 5th Lindau Meeting in Economic Sciences, held in Lindau, Germany, Aug. 19-23. First held in 2004, the biannual meeting gives young researchers the opportunity to have personal interaction with Nobel Prize laureates. Peng was selected through a competitive application process, and was supported in the trip through the National Science Foundation.

A native of China’s Hunan Province, Peng earned a bachelor’s degree in economics from Huazhong University of Science and Technology in Wuhan, Hubei, China. He joined the Syracuse University community in 2011 to begin his graduate studies at Maxwell. His research focus is in econometrics—using mathematics, statistics and even computer data to test theories, make predictions and evaluate policies.

Peng said he was thrilled to be chosen to participate in the meeting. Among the dignitaries attending the meeting’s opening ceremonies was German Chancellor Angela Merkel. “Leaders were interested in this meeting, as they are searching for answers to the economic issues that their countries are facing,” says Peng.

Each morning, the Nobel laureates lectured on a topic of their choice related to economics and led informal roundtable sessions for students. Laureates also joined students at mealtimes for further discussions.

Seventeen Noble laureates engaged with the students during the five-day meeting, offering different perspectives to classic theories at the intersections of economics and critical issues such as inequality, unemployment, finance and big data. They encouraged them to drill deeper and think outside the box. Networking with other young researchers set the stage for Peng for potential future collaborations.

Peng said interacting with the Nobel laureates left him energized and eager to continue his studies at Maxwell, where he is working toward a 2016 graduation and a potential career in academia.

“My current work is studying the theories of high-dimension econometric models, which are the foundation for empirical work dealing with big data sets,” says Peng. “It was emphasized in the meeting, and strengthened my belief of how important my work is. It also gave me a comprehensive and clear picture of what work I may potentially engage in in the future.”