Karin Ruhlandt takes a step forward, adjusts the glasses on the bridge of her nose, and peers at a small graph in the center of a large, white science poster.

“This is why we stay up five days in a row. It’s all for this,” says the interim dean of the College of Arts and Sciences, pointing to the graph, whose trace shows a slight increase. 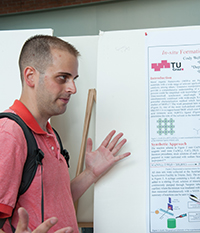 Cody Webb talks about his research project at the poster session.

Standing next to her is student Cody Webb, who, having just stepped off the plane from a research trip in Graz, Austria, nods his head in agreement. “This sort of thing can be a long, exhaustive process,” he says, rubbing his eyes.

For much of the summer, Ruhlandt has been grooming Webb in the finer points of inorganic chemistry—specifically, metal organic frameworks (MOFs) that aid in the selective diffusion of atoms and molecules. The uptick on the graph refers to data obtained from a large particle accelerator in the Italian seaport of Trieste, known as a synchrotron. She, Webb and researchers from the Graz University of Technology (TU Graz) have been using a technique called small-angle X-ray scattering, or SAXS, to measure the size and formation of MOFs.

”MOFs have enormous technological potential,” says Webb, a chemistry major at Le Moyne College who takes chemical engineering courses at Syracuse. “They have cavities, which have many different applications, including catalysis and gas separation. Our studies help us understand how these cavities are formed, in hopes of custom-designing MOFs for specific purposes.”

Webb is one of nearly 90 students participating in a science poster session at Syracuse—an event Ruhlandt refers to as a “celebration of undergraduate research.” The session features posters by 25 students from Syracuse’s Chemistry Research Experience for Undergraduates (REU) Program, led by Ruhlandt and Professor Michael Sponsler. Two of the students are part of an exchange program with TU Graz that Ruhlandt has also established.

In recent years, the poster session has grown to encompass research by students from Syracuse’s Interactive Biomaterials REU Program, led by Julie Hasenwinkel, a biomedical and chemical engineering professor in the College of Engineering and Computer Science. (Hasenwinkel’s REU program is managed by the Syracuse Biomaterials Institute.) Other posters are by students from Syracuse’s biology department, Le Moyne College, SUNY Upstate Medical University and the SUNY College of Environmental Science and Forestry, to name a few.

Dozens of research posters, including Webb’s, line the spacious Milton Atrium of the Life Sciences Complex, which teems with battle-weary students and their proud professors. One of them is Sponsler, who, along with Ruhlandt, has helped build Syracuse’s Chemistry REU Program into one of the biggest in the country.

“There are 60 chemistry REU sites all over the country,” he says. “What makes ours unique is the inclusion of international students. On campus, we work closely with various offices to support as many students as possible. I’m proud that most of my fellow chemistry faculty members [nearly two dozen in all] participate in our REU program and supervise students during the summer.”

Ruhlandt echoes these sentiments, comparing Syracuse’s REU Site to graduate school: “Doing intense research over the summer, not interrupted by classes, gives undergraduates a different perspective of the field. It helps them decide whether or not graduate school is for them.” 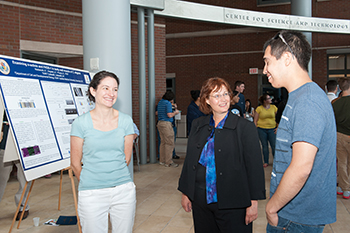 Ruhlandt is particularly proud of Syracuse’s long-running partnership with Le Moyne, which, this past summer, produced five REU students. Four of them were in Syracuse’s chemistry REU program; one, in Syracuse’s interactive biomaterials REU program.

“Syracuse and Le Moyne have a strong commitment to undergraduate research,” O’Brien says. “REU allows students such as Cody to experience, first hand, how basic research is carried out and how they can contribute consequentially to it.”

Linda LeMura G’83, G’87, Le Moyne’s president, is excited about the burgeoning partnership with Syracuse. “Good science, in general, looks beyond institutional boundaries—which is why our partnership with Syracuse University has been so successful,” she says, regarding REU. “Our partnership provides research experiences that one institution, working in isolation, couldn’t offer. It truly enhances undergraduate science education, making it a win-win for students.”

Each REU participant receives a generous summer scholarship, along with free on-campus housing. Some students—who come from as far away as Yale University, the University of California, Riverside, and the University of Texas at Dallas, not to mention institutions in Germany, Austria and Puerto Rico—receive travel assistance.

“Being here all summer has been incredible,” says junior Reesheda Gilbert, an LSAMP student from Kennesaw State University in Atlanta. “I’ve really enjoyed working with [Syracuse chemistry professor] John Chisholm and getting hands-on training in chemical synthesis and catalysis. It’s got me thinking about graduate school.” 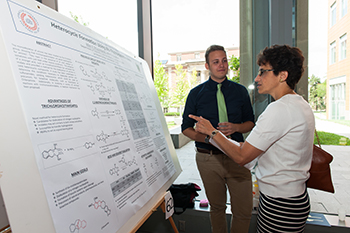 Now in its 15th year, Syracuse’s chemistry REU program has come a long way under Ruhlandt’s and Sponsler’s tutelage. On average, more than 450 students apply for 11 spots a year; over 150 people, for six slots in the exchange program with TU Graz.

Many applicants come from small institutions that are unable to provide adequate research opportunities.

Puerto Rican-born Valerie Lopez is a Ph.D. student in Ruhlandt’s lab. She traces much of her research moxie to a 2009 REU experience at Syracuse, where she studied non-linear optical materials with Meredith Professor James Spencer.

“It definitely jump-started my career as a researcher,” she says. “The REU program gave me the experience I needed to make a clear decision between entering the workforce and going to graduate school. [REU] taught me how to think like a researcher and how to be more independent in the lab.”

Ana Torvisco G‘10, another Ph.D. student of Ruhlandt’s, has been involved with REU as a student and mentor. Torvisco first heard about REU through her advisor at Manhattanville College in Purchase, N.Y., where she was the only chemistry major in her class. Torvisco was so smitten by her 2002 REU stint that, when it came time for graduate school, she choose Syracuse over Georgia Tech. Today, she is a faculty member at TU Graz.

As for the future of REU, Ruhlandt appears poised and confident. “As long as we can provide an opportunity for students to focus on research, Syracuse will remain a bastion for undergraduate science education,” she adds. “Many of the students here today will be the leaders of tomorrow.”