This map of Liberia shows the number of Ebola cases by area.

Newhouse professor Ken Harper scrolls through a series of brightly colored online heat maps of Liberia while talking on the phone with a colleague in another state. He stands at his desk, moving back and forth between computer screens in baggy pants and sandals. He’s talking into the microphone connected to his iPhone, and his face is a mix of concern and concentration.

Harper, associate professor and director of the Newhouse Center for Global Engagement, is working as the U.S. director of a project aimed at better tracking and mapping cases of Ebola in Liberia. The project, which Harper has been working on with Steven T. King at the University of North Carolina at Chapel HIll and others for about six weeks and remains a work in progress, went live Monday at: http://www.ebolainliberia.org. 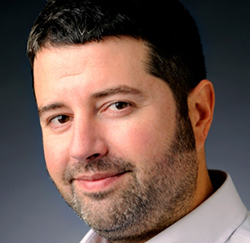 For most people, Liberia and its spreading Ebola outbreak are a world away. For Harper, Liberia is where his friends live, including Thomas Karyha, a former student in Harper’s media development project, Together Liberia. Karyha is now working for the United Nations and the Ministry of Information in Liberia, which has been struggling to contain the deadly, highly contagious disease. As more and more people contract Ebola—the Centers for Disease Control and Prevention put the death toll in West Africa at 1,848—Karyha called Harper to see if he could help.

A number of factors are contributing to the spread of Ebola, Harper says. Many in Liberia do not trust the government, he says, which continues to struggle following decades of civil war that left hundreds of thousands dead. That leads to a largely illiterate population not taking adequate precautions, not reporting new cases and not seeking proper treatment. So while the World Health Organization says it is tracking nearly 3,500 confirmed cases of Ebola, many fear the actual number could be much, much higher, Harper says.

That’s where the web developers come in.

Harper and professor Dan Pacheco, the Peter A. Horvitz chair in Journalism Innovation at the Newhouse School, put the call out to alumni, former students and colleagues about Karyha’s plea for help.

“What can we do to help the Liberian government better keep track of cases?” they asked. “What existing technology in Liberia can we tap into in order to more accurately share and expose this crisis to the world?” they wondered.

The answer? An automatically updating, data-driven website that includes: cases and deaths, including confirmed, probable and suspected cases and a heat map of the area with numbers by region. The site also includes the number of healthcare workers who have contracted or died from Ebola. Harper calls the site a “data visualization dashboard.” The goal is to provide data that is current, accurate and available to all, Harper says. The site is the first official site of its kind to track the latest outbreak of Ebola in West Africa.

Harper assembled a team of journalists from across the United States, including Brian Dawson, a Newhouse graduate now working at IDEO in San Francisco, and King, former head of innovation technology for The Washington Post, now teaching at UNC. King and the team have gathered data for the site from Tony Blair’s Africa Governance Initiative and the Centers for Disease Control.

Team members have donated their time to the project, Harper says. He estimates that everyone’s been working 30 to 40 hours a week for the last six weeks. The project would easily cost at least $30,000 through a private company, he says.

“It’s cliché to say it takes a village, but in this case we needed trusted people who could do it in a hurry,” Harper says.

Harper and King have been developing the project with students in their classes, Harper says, noting that it’s an ideal project to show students an example of something that has to be created, from scratch, very quickly. It will be an evolving work in progress, which is known in the industry as a “minimally viable product,” he says.

“You do not wait for perfection, you get it out. People are dying. Get it out,” Harper says. “You don’t want it so buggy that it’s not useful but you’re building the train as you’re going down the tracks.”