Syracuse University’s Catholic ministry will celebrate the 75th anniversary of the St. Thomas More Foundation and the life and ministry of Msgr. Charles “Father Charles” Borgognoni on with a special event on Saturday, Sept. 13, at the John G. Alibrandi Jr. Catholic Center, 110 Walnut Place. 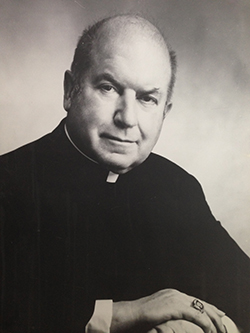 The event will begin with Mass at 4 p.m., followed by a reception (cash bar) at 5 p.m. and dinner at 6 p.m. After dinner, Father Charles’ family and friends and University staff will offer short reflections. At 7 p.m., a new documentary on the life and ministry of Father Charles will be screened.

Tickets are $50 per person, with discounted rates for the purchase of tables of eight. For more information on tickets, call the Alibrandi Center at 315-478-5959 or visit http://www.SUCatholic.org. Complimentary parking will be available at the University Avenue Garage behind the Alibrandi Center.

Father Charles Borgognoni was Syracuse University’s Catholic chaplain from 1962 until his retirement in 1991. Before coming to the University, he was assistant pastor at Our Lady of Pompei parish in Syracuse and director of its amateur theater group, the Pompeian Players. He continued in that role after coming to Syracuse, with the agreement that part of the proceeds from productions would benefit the University’s Newman Association and Catholic ministry.

Father Charles was well known and loved during his time at the University. He served as spiritual advisor for the University’s athletic teams and could often be seen on the sidelines at games in his orange sweater. He hosted weekly spaghetti dinners for students to get to know him and each other.

He raised more than $1 million for the construction of the Alibrandi Center, the new home for Catholic ministry on campus, in the early 1980s.

Before his death in 2007, Father Charles established a fund in the College of Arts and Sciences in memory of his parents, Joseph and Amelia, to promote the study of Catholic theology and religion in society at Syracuse University.