An experimental (i.e., synthetic) vesicle, left, and a theoretical vesicle. The dots represent defects, which help turn the vesicle into a kind of miniature clock.

Working with a team of scientists from the Technical University of Munich (TU Munich), Brandeis University, and Leiden University in the Netherlands, M. Cristina Marchetti and Mark Bowick, professors in the Soft Matter Program in the College of Arts and Sciences, have engineered and studied “active vesicles.” These purely synthetic, molecularly thin sacs are capable of transforming energy, injected at the microscopic level, into organized, self-sustained motion.

Their findings are the subject of a cover-story in the Sept. 5 issue of Science magazine.

The ability to generate spontaneous motion and stable oscillations is a hallmark of living systems. Cells crawl to heal wounds, and the heart contracts periodically to pump blood through the entire body. Reproducing and understanding this behavior, both theoretically and experimentally, remains one of the great challenges of 21st-century science. 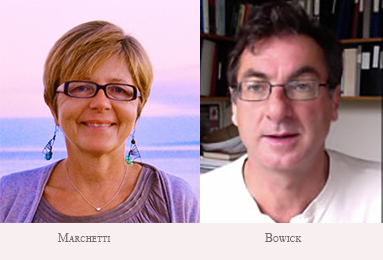 By confining cell extracts of important biological ingredients (i.e., bundles of long filamentary proteins known as microtubules and kinesin motor proteins) to the surface of a lipid vesicle, the TU Munich and Brandeis experimental part of the team has created “active vesicles” that undergo spontaneous oscillations and striking changes in shape. These biomimetic sacs are fueled by energy-consuming kinesins–nanomachines capable of transforming chemical energy into mechanical work–and may be thought of as the first step toward fabricating artificial cells.

Fueled by kinesins, these defects form spatial patterns that oscillate between distinct configurations, turning the active vesicle into a robust miniature clock with tunable frequency.

When confined, the long microtubule bundles coat the surface of the vesicle, forming a liquid crystal, where the filaments are, on average, aligned in a common direction. This type of order, known as “nematic,” is never perfect on a spherical surface (e.g., one cannot comb hair on a sphere without cowlicks). Hence, nematics on a sphere must contain a small number of defects. 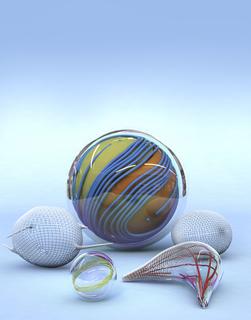 Marchetti and Bowick have been working with Luca Giomi G’09, an alumnus of Syracuse’s Soft Matter Program and an assistant professor at Leiden, in the development of a theoretical model that describes these defects as self-propelled particles on a thin liquid-crystalline shell and adequately explains the observed oscillations.

“Our work hinges on the wonderful experimental innovations of the [Andreas] Bausch and [Zvonimir] Dogic groups at TU Munich and Brandeis, respectively,” says Marchetti, the William R. Kenan Jr. Professor of Physics and associate director of the Syracuse Biomaterials Institute. “It has been gratifying to see that the theoretical work we have developed over the past 10 years, with some new ingredients, has been directly applicable to these experiments.”

“I have worked on defects for over 20 years,” adds Bowick, the J. Dorman Steele Professor of Physics and director of the soft matter program, “but I never imagined one could exploit them to create a tunable clock.”