The Connective Corridor is partnering with the 40 Below Transit Task Force, area cycle enthusiasts and SU student startups on the First Cycle Syracuse Bicycle Fest on Sunday, Sept. 7. 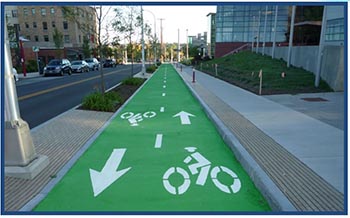 A bike lane on University Avenue along the Connective Corridor

The event will be a gathering of cyclists and spectators to showcase the bicycle culture that is rapidly growing in Central New York, as well as the new network of green bike lines being installed by the Connective Corridor across the city.

The event is the brainchild of Syracuse University alumnus Eric Ennis G’14, a graduate of the public administration master’s degree program in the Maxwell School of Citizenship and Public Affairs and a Central New York native who decided to stay home and be a part of the revitalization happening in Syracuse. Ennis is the new community development block grant (CBDG) program administrator with the City of Syracuse’s Department of Neighborhood and Business Development, and has worked with the Connective Corridor on previous events such as Green Streets and Green Eats last Earth Week. He is the co-chair of the 40 Below Transit Task Force.

The festival runs from 11 a.m. to 2 p.m. along the section of West Jefferson Street adjacent to the Museum of Science and Technology in Armory Square. It will feature a food truck rally, downtown scavenger hunt, kids’ bike safety corral, historic walking tours and Connective Corridor green infrastructure walking tours. Cyclists will converge on Armory Square after their rides for the festival, along with their families and friends. The event will conclude with a showing of the bicycle documentary “The Long Bike Back” in the SU Warehouse Theater from 1:30-3:30 p.m.

Students, faculty and staff bicycling enthusiasts are invited to participate. One of the featured events will be a demo at the festival by Bikerules, a startup by Syracuse University student Jeremy Mingtao Wu, and winner of the last month’s Demo Day 2014 at the Student Sandbox. Wu, a mechanical engineering graduate student in the L.C. Smith College of Engineering and Computer Science, is focusing on developing devices and mobile applications to make bicycle riding much safer. He designed the first prototype for Bikerules in a SU sustainable manufacturing class and is now working on development and launch of the product at the Syracuse Student Sandbox.

Wu is interested in surveying the potential market, and sees Cycle Syracuse as a great way to demo his navigation system, which includes a Bluetooth-enabled signal system device linked to a mobile app, and get user feedback as he refines his prototype which he developed with a 3-D printer. “I’m very excited about Bikerules engaging in the Cycle Syracuse event,” he notes. His next step is a Kickstarter campaign to line up manufacturing and secure patent protection. He’s recently added more SU students to his team, working on the navigation app, assisting him with design and getting the word out through social media.

Event co-sponsor Mello Velo is another example of a student startup that launched and stuck in Syracuse. Started in 2009 by two SU and ESF grads who started a business repairing bikes out of their garage while in college, they later opened a shop and cafe in the University neighborhood, and have been advocates promoting cycling culture in the Syracuse community.

The green bike network along Syracuse’s Connective Corridor is part of growing that culture. It is one of the first in the country to implement new federal standards for bicycle safety, won top honors in a 2013 contest sponsored by the U.S Department of Transportation Federal Highway Administration (FHWA) Office of Safety. The stretch of bike lane on University Avenue was among 12 recognized for safety from more than 150 entries from around the country in 10 different categories at the 2013 Transportation Research Board’s (TRB) annual meeting in Washington, D.C., in January. Final voting was done by TRB meeting attendees.

Green bike lanes were installed on University Avenue and East Genesee Street during phase one of the Connective Corridor project. Green bike lanes are being installed in phases two and three, from Forman Park to Salina Street, with bike lanes to be embedded along West Fayette Street to the Warehouse. Syracuse is one of the first communities in the country to implement green bike lane technology, and through pilot projects, the FHWA is evaluating the use of green as the designated universal color for bike lanes in the same way that blue is the international symbol of accessibility parking.

Additional event sponsors include Cycle in the City and the Onondaga Cycling Club.

For more information about the event, email 40belowtransit@gmail.com