Wendy Chen, a University Fellow in Syracuse’s M.F.A. Program in Creative Writing, is the winner of the Academy of American Poets’ inaugural Aliki Perroti and Seth Frank Most Promising Young Poet Award. Chen won the award for her poem “They Sail Across the Mirrored Sea.” 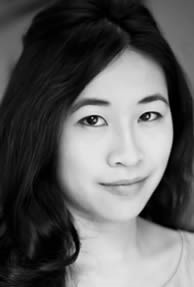 The American Poets Prizes are among the most valuable poetry prizes in the United States.

“We are delighted that Wendy is the inaugural recipient of this prestigious award from such a wonderful organization. Her poem is a fine example of the quality of work the students in our program produce,” says poet Christopher Kennedy G’88, associate professor and director of Syracuse’s creative writing program. “It is an honor to be associated with such a talented young poet and with the academy.”

Syracuse’s top-ranked M.F.A. program is part of the Department of English, based in the College of Arts and Sciences.

Chen, 22, came to Syracuse from Wellesley College in Massachusetts, where she earned a dual bachelor’s degree (with honors) in English and studio art, with a concentration in creative writing.

At Wellesley, Chen wrote for the student newspaper and championed the role of women in leadership and new media, leading to an internship at the Women in the World Summit at New York’s Lincoln Center.

“Every word placed down is a conscious choice and carries specific connotations and emotional baggage with it,” Chen has been quoted as saying. “I’ve learned to be more aware of the inherent emotions and attitudes behind even the most commonplace words.”

Of Chen’s prize-winning poem, Academy judge Alberto Ríos has this to say: “This is poetry of genuine maturity, whose imagery and circumstance are constructed from patience, with a particularly demonstrable talent for turning the slowness of this story’s time into vibrant observation and compelling connection—in that way, reaching from the depths of the poem out to us who are reading it.”

Established in 2013, the Most Promising Young Poet Award recognizes a student poet, 23 years old or younger, with a cash prize of $1,000. The award is open to winners of the current year’s University & College Poetry Prizes, also given by the Academy. Submissions are judged by one of the past or current members of the Academy’s Board of Chancellors.