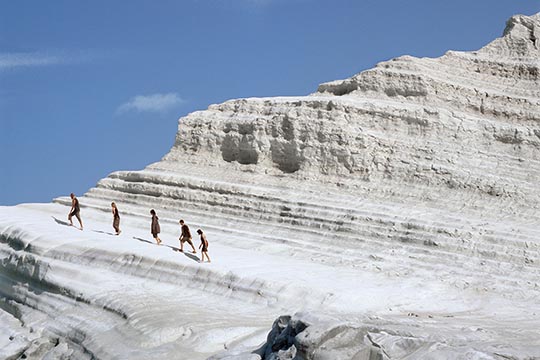 Urban Video Project (UVP) and parent organization Light Work have announced the opening of their 2014-15 programming year with “Western Union: Small Boats (The Leopard)” (2007) by world-renowned visual artist and filmmaker Isaac Julien, from Sept. 11-Oct. 25. This exhibition marks the beginning of “Celestial Navigation: a year into the afro future,” a year-long program of exhibitions and events at Urban Video Project and partner organizations that takes afrofuturism as its point of departure.

“Western Union: Small Boats (The Leopard)” will be exhibited at UVP’s Everson venue, a year-round outdoor projection onto the north facade of the I.M. Pei-designed Everson Museum of Art, overlooking a public plaza and reflecting pool in downtown Syracuse. The projection runs every Thursday-Saturday night from dusk to 11 p.m. during the exhibition.

As part of the exhibition, Julien will give an in-person artist talk on Friday, Oct. 3, at 6:30 p.m. in the Everson’s Hosmer Auditorium, followed by a reception on the plaza. This event will be co-sponsored by the College of Visual and Performing Arts Transmedia Department Film Program.

Julien’s “Western Union: Small Boats (The Leopard)” will be shown as part of UVP from Sept. 11-Oct. 25

“Celestial Navigation: a year into the afro future” will explore the work of major established and emerging artists through an afrofuturist lens, including works by Julien, Sanford Biggers, Xaviera Simmons, Jeanette Ehlers (as part of “The Black Radical Imagination 2014,” curated by Erin Christovale and Amir George), Cristina de Middel and Cauleen Smith. Artist talks, screenings and a panel discussion in spring 2014 will be included in the programming. Partner venues featuring cross-programmed exhibitions include Community Folk Art Center (CFAC) and Light Work.

For more information, go to http://urbanvideoproject.com.

Expanding on the themes of voyages, excursions and expeditions, “WESTERN UNION: Small Boats” is being produced at a time when advances in global telecommunications and new technologies are continually celebrated. One of the major questions arising from this development is the part individuals may play in this flow of information. Questions surrounding the circulation of human lives, the movements of bodies and their personal stories are timely when immigration policies generate controversy on a daily basis and the relationships between nations are the source of much debate.

“WESTERN UNION: Small Boats” concerns journeys made across the seas of the Mediterranean by so-called “clandestines” who leave Libya, escaping wars and famines. They can be seen as economic migrant workers, along with certain Europeans—“Angels” in Walter Benjamin’s terms—who bear witness to modernity’s failed hopes and dreams, and who now travel across oceanic spaces, some never to arrive or return. 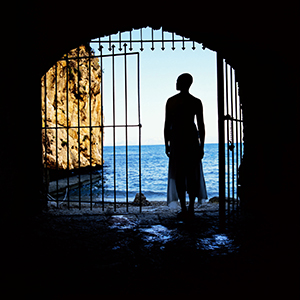 Julien’s film is part of “Celestial Navigation: a year into the afro future”

Julien was born in 1960 in London, where he currently lives and works. While studying painting and fine art film at St. Martin’s School of Art, from which he graduated in 1984, Julien co-founded Sankofa Film and Video Collective, in which he was active from 1983-1992. He was also a founding member of Normal Films in 1991. Julien has taught at Harvard University and Goldsmiths College, University of London, and is currently a faculty member at the Whitney Museum of American Arts; professor of media art at Staatliche Hochschule für Gestaltung Karlsruhe, Germany; and chair of Global Art at University of the Arts London.

Julien first rose to prominence for his feature-length and short-form films and received a Turner Prize nomination in 2001 for “The Long Road to Mazatlán” (1999) and “Vagabondia” (2000). Earlier works include “Frantz Fanon: Black Skin, White Mask” (1996); “Young Soul Rebels” (1991), which was awarded the Semaine de la Critique Prize at the Cannes Film Festival the same year; and the acclaimed poetic documentary “Looking for Langston” (1989), which also won several international awards. More recently, he received a Special Teddy Award at the Berlin International Film Festival for his film on Derek Jarman, called “Derek” (2008), created in collaboration with Tilda Swinton.

Julien’s most recent work has focused on immersive single- and multi-channel video installations. At once minutely detailed and epic in scope, these works constitute layered meditations on the massive social, ecological and economic ramifications of global neoliberalism. Recent audio-visual installation works include “Ten Thousand Waves” (2010), which was shot in China and recently exhibited at the Museum of Modern Art, as well as “Playtime” (2014), an ambitious new body of work exploring the dramatic and nuanced subject of capital, starring an international roster of actors

Julien’s honors and awards include the Performa Award (2008), the prestigious MIT Eugene McDermott Award in the Arts (2001) and the Frameline Lifetime Achievement Award (2002). Most recently, he received the 2014 Golden Gate Persistence of Vision Award from the San Francisco Film Society. Julien has had solo shows at the Pompidou Centre in Paris (2005), MOCA Miami (2005) and, most recently, at SESC Pompeia in Brazil (2012), among others. His film “Ten Thousand Waves” (2010) was on a world tour including 16 countries. His work “Paradise Omeros” was presented as part of Documenta XI in Kassel (2002). Julien is represented in both public and private collections, including the Museum of Modern Art, New York; Tate Modern; Centre Pompidou; Guggenheim Collection; Hirshhorn Collection, Albright-Knox; Goetz Collection; the Louis Vuitton Art Foundation; LUMA Foundation; and the Zeitz Foundation.