“Perspective” is the theme of the 2014 Syracuse Symposium™, organized and presented by the Syracuse University Humanities Center in the College of Arts and Sciences. The semester-long series begins with a keynote address by Kevin Powers, a U.S. Army veteran and best-selling author, on Thursday, Sept. 11, at 7 p.m. in Watson Theatre in the Robert B. Menschel Media Center 316 Waverly Ave.

The symposium continues with a variety of thematically related lectures, panel discussions, performances, screenings and exhibitions. All events are free and open to the public, except the Society for New Music performance (“Sound Perspectives East and West”) on Nov. 2. For more information, call 315-443-7192 or visit http://syracusehumanities.org.

“This year’s symposium invites us to become aware of the contingent nature of our own perspectives and to consider the degree to which the perspectives of other people, cultures and disciplines coincide with or contradict our own,” says Gerald R. Greenberg, the college’s senior associate dean and interim director of the Humanities Center. “The diversity of this year’s events demonstrates not only the multiple intellectual viewpoints contained within the core disciplines of the humanities, but also the capacity of humanist inquiry to reach across geographical and intellectual boundaries.” 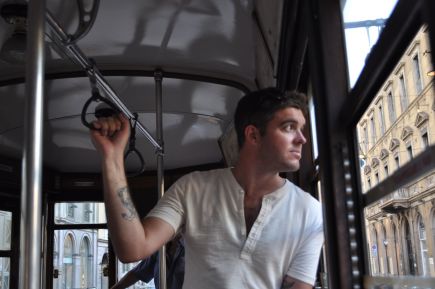 Kevin Powers, the first speaker in this year’s Syracuse Symposium, who will speak Thursday, Sept. 11

Kevin Powers, author
“From the Inside Out: A Veteran’s Perspective in Poetry and Prose”
Thursday, Sept. 11, 7 p.m.
Watson Theatre, Menschel Media Center

A veteran of the Iraq War, Powers is an acclaimed poet and fiction writer. He is best known for the novel “The Yellow Birds” (Little, Brown, & Company, 2012), a finalist for the National Book Award, as well as winner of both the PEN/Hemingway Award for Debut Fiction and Guardian First Book Award. Powers has also published a collection of poetry titled “Letter Composed During a Lull in the Fighting” (Little, Brown, & Company, 2014).

Now in its 12th year, the Syracuse University Human Rights Film Festival is presented by the S.I. Newhouse School of Public Communications and features groundbreaking documentaries and fiction films about human rights and social justice issues. The festival opens with Thomas Allen Harris’ acclaimed 2014 documentary “Through a Lens Darkly: Black Photographers and the Emergence of a People.”

More information is at http://suhrff.syr.edu.

Co-Sponsors: The College of Arts and Sciences (the departments of English, women’s and gender studies, LGBT studies program and Asian/Asian American studies program); the Maxwell School of Citizenship and Public Affairs (the departments of anthropology, history, and international relations); the Disability Cultural Center; the LGBT Resource Center; and the New York State Council on the Arts’ Electronic Media and Film Presentation Funds Grant Program, administered by the ARTS Council of the Southern Finger Lakes

Mark Trodden
Fay R. and Eugene L. Langberg Professor of Physics, University of Pennsylvania
“Embracing the Dark Side: In Search of the Missing Pieces of the Cosmic Puzzle”
Thursday, Oct. 2, 4 p.m.
Kilian Room, 500 Hall of Languages

Former Syracuse physicist Trodden returns to campus for an up-to-the-minute discussion about cosmology, the science exploring how the entire visible universe has evolved since the Big Bang, approximately 13.8 billion years ago. Designed with a lay audience in mind, his presentation doubles as this year’s Kameshwar C. Wali Lecture in the Sciences and Humanities. At UPenn, Trodden is also chair of the physics and astronomy department and co-director of the Center for Particle Cosmology.

Trodden’s event is followed by a special lecture by Wali titled “The Split Face of Science: Is Science an Endangered Species?” taking place on Friday, Oct. 3, at noon in the Leonard and Ruth Sainsbury Library in the Tolley Humanities Building.

Presented in cooperation with the Kameshwar C. Wali Lecture in the Sciences and Humanities and the Department of Physics, both in the College of Arts and Sciences

A Tony Award-winning playwright, performer and activist, Ensler is best-known for “The Vagina Monologues,” a 1996 play that has been translated into nearly 50 languages, performed in more than 140 countries and recreated as an HBO film. The success of that play inspired her to create V-Day, a global activist movement to end violence against women and girls, which has raised more than $90 million to date. Syracuse University’s Students Advancing Sexual Safety and Empowerment is actively involved with V-Day’s latest campaign, One Billion Rising.

Organized by the Point of Contact Gallery, “Place and Moment” explores themes of perspective, ways of seeing, and perception and gaze in the visual and literary arts.

Co-Sponsors: the College of Arts and Sciences and the Coalition of Museums and Arts Centers

This daylong event celebrates the 50th anniversary of Syracuse’s Florence Graduate Program in Renaissance Art, as well as the retirement of the program’s longtime director, Gary M. Radke ’73. The symposium brings together museum professionals and teaching scholars, all of whom are alumni of the Florence Graduate Program, to consider multiple perspectives on the production and interpretation of Italian Renaissance Art (c. 1300-1600). Topics of discussion include spirituality, ethics, patronage, politics, gender, rhetoric and collaborative practices.

Co-Sponsors: the Department of Art and Music Histories and the 2014 Ray Smith Symposium, both in the College of Arts and Sciences

The fourth play in August Wilson’s Pittsburgh Cycle, “The Piano Lesson” is set in the aftermath of the Great Depression and follows an African American family trying to overcome its troubled past. The 1990 play has won many major awards, including a Pulitzer Prize for Drama and a Tony Award for Best Play.

A panel discussion titled “Perspective/Audience: Matters of Race in Viewing the Plays of August Wilson” will take place on Sunday, Oct. 26, following the 2 p.m. performance.

Intersectionality, transnationalism and decoloniality are described as “ways of knowing,” or perspectives, that are crafted to contest subjugation. Yet, critical uptake and institutionalization of these perspectives can distort and render obsolete their oppositional histories. This colloquium explores each perspective and cultivates its radically different possibilities.

Co-Sponsors: the College of Arts and Sciences (the departments of African American Studies, English, philosophy, religion and women’s and gender studies; the LGBT studies and writing programs; and the Democratizing Knowledge Project), the School of Education (cultural foundations of education Program), and the Maxwell School of Citizenship and Public Affairs (the Department of Political Science and the South Asia Center)

For the past 30 years, Weems has examined the complex and contradictory legacy of African American identity, class and culture in the United States. Her intimate depictions of children, adults and families in simple settings capture the ongoing struggle for racial equality, human rights and social inclusion. Weems is a 2013 MacArthur Fellow who has extended her talent to social reform efforts in her native Syracuse, with projects such as Operation Activate and the Institute of Sound and Style.

A 2014 Guggenheim Fellow, Frazier G’07 uses the conventions of social documentary to explore traditional narratives of urban growth and the triumph of industry. “The Notion of Family” includes photographs, video stills and writings about Frazier’s family, with special emphasis on the economic decline of her hometown in Braddock, Pa.

Society for New Music presents its annual fall concert at Syracuse with a program of contemporary multimedia works by internationally renowned composers. The concert combines sound and video to showcase diverse cultural heritages and musical perspectives.

“Witnessing Archival Presentation” is a panel discussion about media preservation, with emphasis on magnetic audio- and videotape. Inspired by the format of Ted Koppel’s public affairs TV program “Viewpoint,” the event also touches on the future of humanities scholarship and inquiry into late-20th-century world events.

John Western
Maxwell Professor of Teaching Excellence and Meredith Professor of Geography, Syracuse University
“Tales of the City: A Hundred Years of Strasbourg by Strasburgers”
Friday, Nov. 14, at 11:30 a.m.
For reservation, please contact the Humanities Center

Western draws on his critically acclaimed book “Cosmopolitan Europe: A Strasbourg Self-Portrait” (Ashgate, 2012) to create a compelling overview of this ancient French city. Western will share the results of his more than 160 interviews, addressing issues of identity, race, nationality, culture, politics and representation.

Co-Sponsor: the Renée Crown University Honors Program in the College of Arts and Sciences.

U.S. Army veteran Brian Turner reads from his critically acclaimed memoir “My Life as a Foreign Country” (Jonathan Cape/Random House, 2014), recounting his wartime experiences in Iraq and Bosnia. Turner is also the author of the two award-winning poetry collections: “Here, Bullet” (2005) and “Phantom Noise” (2010), both published by Alice James Books. His appearance is part of the Downtown Writer’s Center’s Visiting Author Readings Series.

This two-day symposium brings together scholars and community organizers to discuss innovations in the preservation, study and exhibition of Native American life and history. Special attention is paid to the role museums and cultural heritage centers, such as Skanonh, play in the revitalization efforts of Indigenous nations and people.

Launched in 2001, Syracuse Symposium has become a fall tradition at SU, drawing thousands of people to free lectures, panel discussions, performances and exhibitions built on annual themes. Past symposia include “Listening,” “Identity,” “Conflict: Peace and War,” “Migration,” “Justice” and “Light.”

The Humanities Center, founded in 2008, fosters public engagement in the humanities, and is home to the Central New York Humanities Corridor; the Jeanette K. Watson Distinguished Visiting Professorship program; the HC Mini-Seminar and Syracuse Symposium Seminar series; the HC Library Series and other research initiatives, annual fellowships and public programming.