In her spare time, Margie Chetney, office coordinator in the Department of Sport Management in the David B. Falk College of Sport and Human Dynamics, sure gets a lot of strikes.

Chetney is an accomplished bowler, taking up the sport when she was eight years old in a junior league with her brother. She bowled competitively across the state as a youth and teenager, and has continued the hobby today. 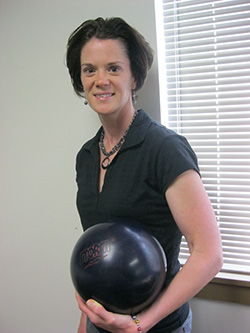 Think it’s hard to roll just a few strikes in a row? How about stringing together 12 straight strikes? Margie has five perfect 300 games to her credit, two 298 games and one 299 game. Her career-best three-game series is 772. She rolled 300 games on back-to-back days in the 2011 Post-Standard Women’s Masters Tournament, where she holds the record for high game (300) and high two-game series (544.) She finished in the top 16 out of 200 bowlers in the 2014 Post-Standard Women’s Masters in March 2014.

Chetney was even “Queen of the Lanes” for a day in 2012 when she won the Syracuse Women’s Bowling Association Queens Tournament. Never did she think she would actually wear a tiara!

She has competed at the national level, traveling to Reno and Wichita for the United States Bowling Congress (USBC) National Championships, as well as taking part in the USBC National Queens Tournament in 2011 in Syracuse at the Oncenter. Her 12-game score was good enough to finish 64th among 400 women from across the world.

Chetney has two New York State titles to her credit: the 2011 Women’s Singles title and the 2007 mixed doubles title with her husband, Matt. She also won five Syracuse Women’s Bowling Association city tournament titles. She has served as the president of the premier women’s scratch league in Syracuse for the past five years and annually participates in tournaments around the state.

Bowling also played “matchmaker” for Chetney, as she met her husband at a tournament in 2003. They married in 2006 and have two children, six-year-old Haylee and four-year-old Jake.